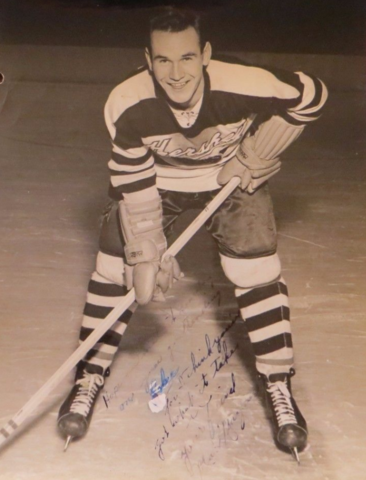 Marquess played junior Hockey with the Trail Smoke Eaters in 1943-44, helping the team to the 1944 Memorial Cup finals, in which he scored 8 goals and 11 assists in 17 games.

Marquess played for the Moose Jaw Canucks of the SJHL the next season, where once again he helped the team to the Memorial Cup finals, scoring 19 gaols and 8 assists in 16 games.

Marquess spent most of the 1945-46 season with the EHL's Boston Olympics, while also playing 4 games with the Regina Capitals at the start of the season.

Marquess started the 1945-46 season with the Boston Olympics, but was called up to the NHL Boston Bruins, where he scored 5 goals and 4 assists in 27 games and worked well on a line with Bill Shill and Jim McGill. He also suited up for four games when Boston lost to the Montreal Canadiens in the semifinals.

Marquess signed with the AHL Hershey Bears for the 1946-47 season, and became a regular in Hershey where he notched consecutive 20-goal seasons in 1948 and 1949.

Marquess then played five years in the PCHL / WHL with the Tacoma Rockets, Seattle Bombers and the Victoria Cougars and exceeded the 25-assist plateau three times.

Marquess retired in 1958 after playing two years of senior Hockey with the Kamloops Chiefs.