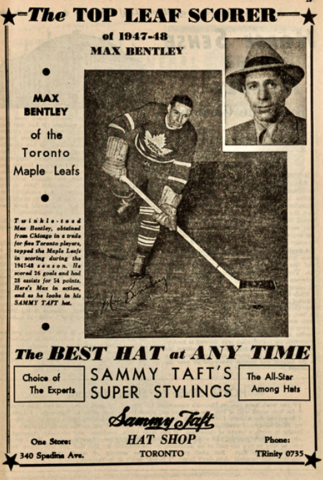 Famous Haberdashery of Toronto, Ontario
Sammy Taft Hat Shop was a stop for every well dressed Hockey player, along with other athletes, actors and politicians.

Max Bentley is seen here in both a smart looking hat and while playing for the Toronto Maple Leafs.

Hockey Hat Trick History
Alex Kaleta of the Chicago Black Hawks wandered into Sammy Taft’s establishment in Toronto and took a liking to a fancy fedora. There was only one problem: He didn’t have sufficient funds to purchase it. Taft, an entrepreneur with obvious promotional skills, made a proposal. If Kaleta happened to score three goals against the Maple Leafs that evening.......Jan. 26, 1946, he should return to the store and the hat would be his for free. Kaleta not only scored three goals. He scored four in a 6-5 loss to Toronto at Maple Leaf Gardens.

As Taft fondly recalls, the Toronto press ran with the story. On the radio that night, when he listened for Hockey results, the big news was “Blackhawk Alex Kaleta’s hat trick.” The next day’s newspapers were all over it too. Although there are other versions about how one of the most famous terms in Hockey - and the lexicon of all sports........evolved, the tale of Taft and Kaleta is officially recognized by the Hockey Hall of Fame. Kaleta went on to complete the season that year with an NHL career-high 46 points.

NOTE
Sammy Taft, as a young lad, was the team mascot for the Ottawa Senators when they won the Stanley Cup in 1927, a team full of Hall of Famers and also well dressed men.