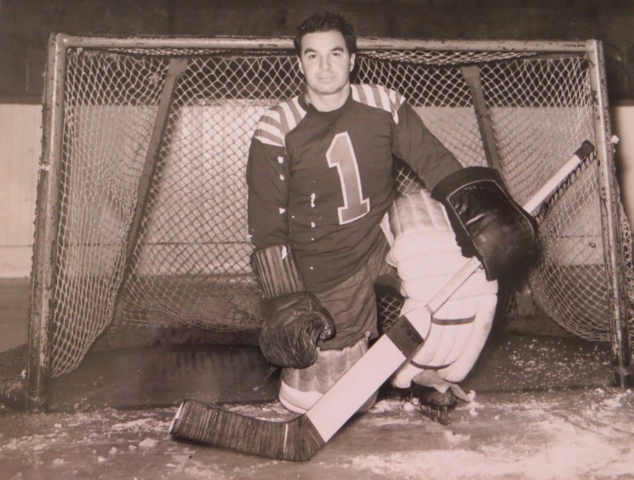 Roberts went from playing goal for his high school, the Somerville High School to signing with the Boston A.A. Unicorns.

On December 8, 1925, Roberts substituted for Boston Bruins injured regular Doc Stewart in a 3-2 win against the Montreal Maroons; at age 19, he was the youngest goaltender in NHL history, until surpassed by Harry Lumley nearly twenty years later.

Roberts appeared in parts of 2 games, giving up 5 goals in 90 minutes while compiling an 0-1 record.

Because Roberts played for the Bruins under these emergency circumstances, he lost his amateur status, and was unable to return his amateur team - the Boston A.A. Unicorns.

Roberts joined the New Haven Eagles of the Canadian-American Hockey League / Can-Am for the next two seasons.

After nearly 6 full seasons in the Can-Am league, Roberts finally returned to the NHL on March 10, 1932. The New York Americans promoted Moe in order to replace the injured Roy "Shrimp" Worters. He played extremely well in that game as the Americans knocked off their cross town rivals the New York Rangers 5-1.

Following a return to New Haven for the 1932-33 season, Roberts rejoined the Americans for six games during the 1933-34 season, witha 1-4 record with a 4.46 GAA. Even though he played in six games with the Americans, Roberts spent the majority of the season with the International Hockey League's Cleveland Falcons.

Roberts returned to Cleveland the next season and began the 1935-36 season as a member of the Falcons before playing in one game with the IHL's Syracuse Stars and before being loaned to the Rochester Cardinals (IHL).

Roberts also played three games with the Pittsburgh Hornets (AHL) at the end of the 1941-42 season.

Due to his military obligations with the United States Navy, Roberts left the game of Hockey for three years (1942-45), returning for the 1945-46 season with the Washington Lions of the Eastern Amateur Hockey League before stepping away from the game once again following the 1945-46 season.

The Chicago Black Hawks hired Roberts as a trainer. In addition to his duties in the dressing room, Roberts often donned the pads during practice in order to give players some shooting practice. This helped keep Roberts sharp and in Hockey shape. Then on November 25, 1951, Roberts had to finish the third period in a NHL game for the injured Harry Lumley, at that point the Black Hawks' starter. Although Roberts didn't yield a goal, his Hawks still fell to the Detroit Red Wings, 5-2. The then 45-year-old Roberts, in his last NHL game, became the oldest player ever to play in an NHL game; a record he held until broken by Gordie Howe in 1979, and also passed by Chris Chelios. He remains the oldest goaltender to play in an NHL game.

Roberts also was the final NHL player who was active in the 1920s.

Maurice Roberts was inducted into the United States Hockey Hall of Fame in 2005.