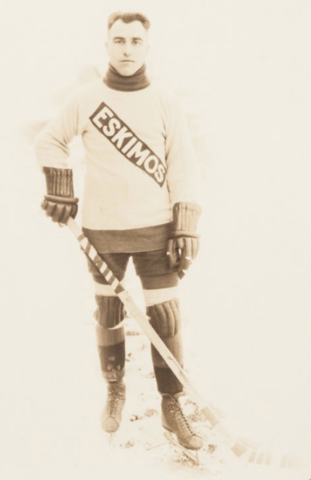 Simpson was nicknamed "Bullet" because of very fast skating ability -
Simpson started his career in the Canadian west. He learned the sport of ice Hockey on a frozen slough, near his house, during the early 1900s. As Bullet Joe once stated, Manitoba Avenue ran east and west in the middle of Selkirk. The boys living in the north end were the northern team and those south of Manitoba Avenue made up the southern team.

After graduating from the Selkirk Fishermen Juniors, Simpson played senior ice hockey with the Winnipeg Victorias of the NHA in 1914–15.

Prior to enlisting in the Canadian Army for World War I he captained the 1916 Allan Cup Champions 61st Battalion Team of Winnipeg. During the war he served with the 43rd Cameron Highlanders and his unit held part of the British front alongside a battalion commanded by Major Winston Churchill. Bullet Joe was wounded twice during the war, once at the Battle of the Somme, and once at Amiens. He received the Medal of Military Valour.

Simpson returned home in February 1919 having achieved the rank of lieutenant. He was in time to play in the last four games of the ice Hockey season for his home town, Selkirk Fisherman Seniors of the Manitoba Seniors League. He started again for the Seniors the following year.

In 1920, at 5'10" and 175 pounds, this right-handed defenceman's break came in a Winnipeg pool room when Kenny MacKenzie of the Big 4's Edmonton Eskimos offered Bullet $3,000 to turn professional. Upon hearing the offer, he chalked his cue and replied that if MacKenzie could sell the deal to his father then Edmonton would have themselves an ice Hockey player. Edmonton got their player and Bullet headed off to join the Eskimos in 1920, signing as a free agent on November 4.

In 1921–22, he won a Western Hockey League first team all-star berth. He was named to the first team on three occasions and to the second team once. At that time, Newsy Lalonde called Bullet Joe Simpson the greatest living Hockey player. His end-to-end rushes were legendary and without comparison.

When the Western Hockey League ceased operations at the end of the 1924–25 season, Simpson's contract was purchased by the New York Americans of the National Hockey League. Bullet Joe Simpson, John Morrison and Roy Rickey] were traded September 18, 1925 for $10,000.

Bullet played six seasons with the Amerks and in 1931 took on the role of team coach for three years. He later managed the New Haven and Minneapolis teams.

Simpson moved to Florida in 1938 to promote ice Hockey. He later suffered a heart attack that kept him inactive for two years. Another retired ice Hockey player and Floridian came to his aid. Art Coulter hired him to work at the Coulter White's hardware store in Coral Gables Florida, a position he held until 1965

In 1975, he was inducted into Canada's Sports Hall of Fame.

In 1994, the Marine Museum of Manitoba in Selkirk restored a 1963 flat-bottomed freighter which is now on display and renamed the Harold Bullet Joe Simpson.