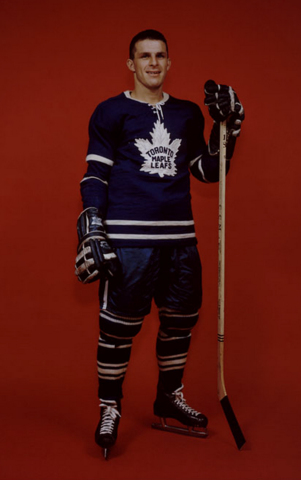 Brewer played his junior Hockey with the Toronto Marlboros from 1955 to 1958 and helped the Marlboros win the 1956 Memorial Cup championship.

Brewer earned his first pro Hockey experience as a 19 year old, playing two games for the Toronto Maple Leafs in the 1957-58 season. The next year he became a regular with the Maple Leafs. Brewer's speed and agility were well known, but his tendency to end up in the penalty box was a problem, especially early in his career. Twice he led the NHL in penalty minutes, in 1959-60 sitting out the equivalent of two and a half games. He had a trigger temper and often took penalties by retaliating after hits and jibes from other players.

Brewer was an extremely principled man, almost to a fault. Paradoxically he would use all that attention he supposedly hated time and time again to fight for what he believed in. For example, Brewer first threatened to retire after his sophomore season in 1960, because the Leafs would not pay him $100 to cover some medical expenses. He announced through the media he would play football that season for McMaster University in nearby Hamilton. Brewer was already taking courses there towards a bachelor of arts degree. The Leafs reportedly gave Brewer $200.

The Leafs' savvy defensive standouts Brewer, Allan Stanley, Bob Baun and Tim Horton were the foundation of the Toronto team that captured the Stanley Cup for three consecutive seasons beginning in 1961-62. Brewer was selected to the First All-Star Team following Toronto's championship run in 1962-63. Even with the success or perhaps because of it Brewer found the pressure of playing professional Hockey in a city like Toronto overwhelming. He was a tense man during his time with the Leafs. He disliked media attention and the added pressure of playing in front of Hockeymad fans didn't sit well with a player who already pushed himself to be the best at his position.

Brewer was adept at getting in an opponent's way, using clean tactics and not so clean tactics, such as cutting the palm out of his gloves to facilitate a sneaky kind of holding, at least until referee Vern Buffey discovered the trick.

During training camp in 1965, Brewer had an on ice disagreement with teammate Johnny Bower that continued into the dressing room. Imlach sent the defenseman home for a few days "to think about it." Brewer did think about it, and shocked the Hockey world when he quit the Maple Leafs in 1965, choosing to complete his bachelor of arts degree at the University of Toronto. He would stay out of the NHL for four years.

Brewer decided he wanted to play for Canada's national team in 1966 but had to struggle, again with Imlach, to regain his amateur standing. Imlach, who could hardly stand in the way of a man who wanted to play for his country, finally allowed Brewer to play for the national team, which he did for one year. He then spent a season as a player-coach with the Muskegon Mohawks, a Michigan, team in the International Hockey League. Brewer was a first team all star and won the outstanding defenceman award, and was also earning a share of the gate because of his star status. His next stop was in Finland, again as a player-coach with Helsinki IFK and the Finnish National team while he took courses at the University of Helsinki.

While Brewer was away, his professional rights were traded by the Leafs to the Detroit Red Wings, along with Frank Mahovlich, Pete Stemkowski and Garry Unger, for Norm Ullman, Paul Henderson and Floyd Smith. It took Detroit manager Sid Abel more than a year to sign Brewer, which he did one hour before those rights would have reverted to the Maple Leafs. Brewer was partially convinced by Mahovlich and Bob Baun, former teammates in Toronto whose careers were rejuvenated with the Red Wings. Mahovlich, who had wilted under Imlach's intense pressure in Toronto as well, called Brewer in Finland several times to encourage his return to the NHL.

Brewer lasted a season in Detroit, posting career highs for assists and points in the more offensive league. In the summer of 1970, he sent a two-paragraph letter to Abel setting out his retirement, an announcement that shocked his teammates and management, opting to take a job with the KOHO Hockey stick company. Brewer returned to the ice only after the Red Wings traded him to St. Louis late in the 1970-71 season. He would play 61 games with Scotty Bowman's Blues over two seasons, before retire again.

Brewer then joined the Toronto Toros of the World Hockey Association in 1973-74 and played for one year. In 1979-80, after almost six years out of the game, he made a comeback with the Maple Leafs. "I guess I've always had it on my mind," the 41 year old said, "to die a Maple Leaf." He played for 20 games before quitting for good.

Player agent and NHL Player's Association boss Alan Eagleson had been instrumental in Brewer's reinstatement as an amateur in 1966. After his career finally ended, however, Brewer began to investigate some of Eagleson's business dealings. Brewer and his long time partner Susan Foster supplied much information to journalist Russ Conway, who authored a report on how Eagleson misused the players' trust and their money. Soon they went to the FBI, and brought perhaps the most powerful man in Hockey down.

Brewer's findings led to Eagleson's eventual conviction on a number of fraud related charges. The former head of the players' association was jailed in 1998, thanks in large measure to Brewer's efforts on behalf of the alumni association.