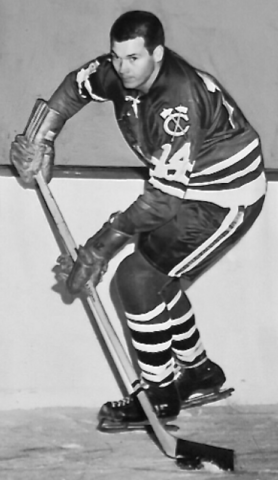 McDonald grew up in Winnipeg's Weston district, his Hockey career beginning at age 15 in St. Boniface, Manitoba, on a junior team sponsored by the Canadiens (St. Boniface Canadiens). He won the Manitoba Junior Hockey League / MJHL scoring title in 1954, and two Turnbull Cup championships in 1953 & 1954. He led the St. Boniface Canadiens to the 1953 Memorial Cup final, losing to the Barrie Flyers.

McDonald joined the Ontario Hockey Association / OHA's St. Catharines Teepees for the 1954-55 season. He scored 82 goals during his two years with the Teepees.

McDonald turned pro with Rochester Americans of the American Hockey League / AHL for the 1956-57 season, helping them reach the 1957 Calder Cup finals. He scored 3 goals during their playoff run.

McDonald scored 30 goals for Rochester the next season, and was called up to Montreal for two playoff games with the Canadiens when they won their third consecutive Stanley Cup in 1958.

The next year, he scored his 1st NHL goal on Ed Chadwick of the Toronto Maple Leafs on October 29, 1958 at Maple Leaf Gardens. He had 13 goals (23 assists) as a rookie working on a line with Ralph Backstrom and Don Marshall, helping the Canadiens win two more Stanley Cups in 1959 and 1960. Still, he was not popular with the Forum patrons who expected him to be as good as the man he replaced, Bert Olmstead.

In June 1960, McDonald was acquired by the Chicago Black Hawks, scoring 17 goals during the 1960-61 season, and helped Chicago win its 1st Stanley Cup in 23 years, scoring the cup winning goal on April 16. McDonald played on the original "Scooter Line" with Ken Wharram and Stan Mikita and notched two 20-goal seasons.

McDonald was traded to Boston by Chicago with Reggie Fleming for Doug Mohns on June 8, 1964, and played the 1964-65 season with the Boston Bruins.

McDonald was traded to Detroit by Boston on May 31, 1965, and helped the Red Wings reach the 1966 Stanley Cup finals. He played in only 12 games for Detroit the next season, playing mostly for the Pittsburgh Hornets in the AHL, and led the Hornets to the 1967 Calder Cup Championship.

In June 1967, the Pittsburgh Penguins in the NHL Expansion Draft claimed the crafty veteran, and he was named the Penguins first captain, and assisted on the first goal in their history, scored by Andy Bathgate against the Canadiens on Oct. 11, 1967. He scored 22 goals while teamed with Andy Bathgate and Val Fonteyne.

McDonald played briefly for the Detroit Red Wings (19 games) in 1971-72 season, playing most of the season with the Tidewater Wings in the AHL.

McDonald was Selected by the Winnipeg Jets on February 12, 1972 at the 1972 World Hockey Association / WHA General Player Draft. He would sign with Winnipeg, becoming the 1st captain of the Winnipeg Jets. He also scored the first regular season goal in Winnipeg Jets history on October 12, 1972 vs the New York Raiders at Madison Square Garden.

McDonald was a integral part of the club's drive to the 1st league championship series, the Avco World Trophy (Avco Cup), losing to the New England Whaler. He retired after scoring 12 goals for the Jets in 1973-74.