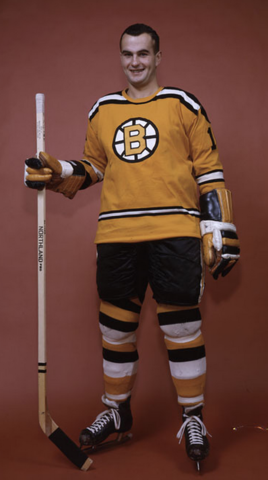 Oliver Played 5 years of junior Hockey with his home-town Hamilton Tiger Cubs of the OHA, Oliver was named the Red Tilson Memorial Trophy winner as the OHA's Most Valuable Player in 1957-58. After scoring 90 points in 52 games as a 20-year-old, he signed a professional contract and was assigned to the Edmonton Flyers, a Detroit Red Wings affiliate, before being promoted to the National Hockey League with the Detroit Red Wings.

Murray's stay in Detroit was relatively brief. He appeared in parts of two seasons, scoring 31 goals and 31 assists for 62 points in 103 games. While it was short it was definitely sweet for Murray as he often got to center a line with his boyhood idol on right wing - Gordie Howe.

In January 1961 Oliver, Gary Aldcorn and Tom McCarthy were sent packing to Boston in exchange for Vic Stasiuk and Leo Labine. It was in Boston that Oliver became a league star, with his quick feet and smart playmaking skills, the small center was a consistent scorer and hustling worker.

Oliver played for the Bruins until 1967. While in Boston, Oliver centered the B.O.W. line with wingers Johnny Bucyk & Tommy Williams, where he starred as a crafty stickhandler and patient playmaker. He put up a NHL career high 68 points in 1964, despite knee surgery the prior season. He was traded in 1967 to the Toronto Maple Leafs, where he centered a line for three years with Bob Pulford and Ron Ellis.

Oliver was traded in 1970 to the Minnesota North Stars and he played five seasons with this club. A highlight for him was scoring seven playoff goals in 1971 when the spunky North Stars extended the Montreal Canadiens to six games in the semi-finals. Oliver also scored a career-high 27 goals in 1971-72 centring Dean Prentice and Lou Nanne.

Fed up with a bitter contract dispute with the North Stars, he hung up his skates in 1975 after playing over 1,100 NHL contests.

Oliver Murray stayed very active in Hockey after retiring. Initially he got into a sales position with a Hockey stick company, thanks to friend Lou Nanne. Three years later Nanne became general manager of the Minnesota North Stars, hired Murray as an assistant coach. He worked with the club until the 1985–86 NHL season, with 37 games as head coach. He was as a scout with the Vancouver Canucks and later took over as the club's director of pro scouting.