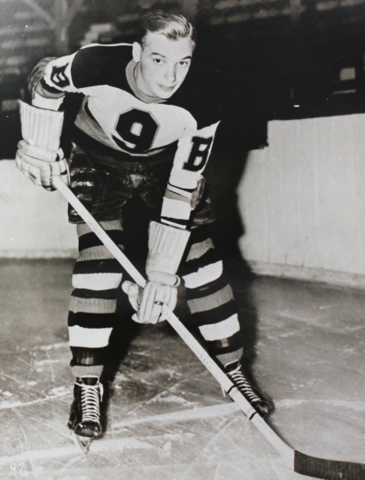 Conacher next played junior Hockey with the West Toronto Nationals in the Ontario Hockey Association / OHA junior league between 1933 and 1936. In his third season, 1935–36, Conacher led the OHA junior league in scoring with 12 goals in 10 games. The Nationals, led by Roy and Bert Conacher, won the OHA title and reached the 1936 Memorial Cup final against the Saskatoon Wesleys. In 12 Memorial Cup playoff games, Roy Conacher scored 8 goals and 5 assists. West Toronto won the best-of-three final in two consecutive games, 5–1 and 4–2, to capture the 1936 Memorial Cup championship.

Conacher played two seasons of senior Hockey, first with the Toronto Dominions of the OHA senior league in 1936–37 where he was an all-star for the 1937 J. Ross Robertson Cup championship team. He then played with the Kirkland Lake Hargreaves of the Northern Ontario Hockey Association.

The Boston Bruins first invited Conacher to their amateur camp in 1935 where the then 17-year-old made a good impression on manager Art Ross. Following his two seasons of senior Hockey, the Bruins signed Conacher to a contract on October 23, 1938.

Conacher made his National Hockey League / NHL debut in the 1938–39 season. He scored his 1st NHL goal on November 22, 1938 vs Dave Kerr of the New York Rangers, the game winner at 15:46 of the 3rd period. He recorded 37 points in 47 games. His 26 goals were the most in the league; it would be 54 years before another rookie, Teemu Selänne, would lead the league in scoring. Conacher added ten points in 12 playoff games, including both goals in a 2–0 victory over the Toronto Maple Leafs in the fourth game of the 1939 Stanley Cup Final, and he then scored the Stanley Cup-winning goal on Turk Broda in the deciding game on April 16, 1939.