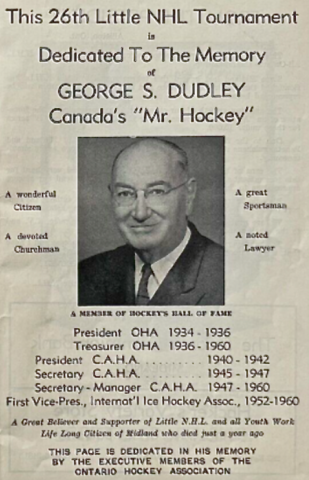 Before Gordie Howe became Mr Hockey, George Dudley was known as Canada's Mr Hockey, as he had his hands and knowledge in just about every circle of Hockey in Canada, helping to develop and define amateur ice Hockey and regulations on player salaries and transfers, designed and implemented rules, many of which he later negotiated with the NHL, and agreements were made on playing rules and recognition of each other's suspensions.

Dudley was directly involved with picking a team to represent Canada from 1940 to his death in 1960.

Known as a forward thinker regarding the development of Hockey, Dudley was also elected secretary of the International Ice Hockey Federation / IIHF in 1945 and first vice-president of the IIHF in 1957 for his knowledge of the international game.

Toronto Maple Leafs coach Punch Imlach quoted that, "he did more for Hockey than any living man"

Dudley and William A. Hewitt are the namesakes of the Dudley Hewitt Cup. It was first awarded by the Canadian Junior Hockey League in 1971 to the Central Canada Junior A champion team, who moves on to the national Centennial Cup competition.

The CAHA then arranged to give 25 per cent of its annual proceeds towards building a facility for the Original Hockey Hall of Fame, and Dudley expected that amount to be $4,000 to $5,000.

The CAHA added the title of manager to the secretary's role in 1947, and Dudley served as secretary-manager of the CAHA until 1960.

- Was named first vice-president of the IIHF and chairman of the North American delegation on July 12, 1957, and facilitated the first exhibition tours for Soviet Hockey teams in Canada.

Dudley was named to the selection committee for two Hockey halls of fame. In January 1948, the Original Hockey Hall of Fame increased its board of governors from 9 to 16 people to give better representation across North America, and Dudley was chosen as a new board member.

- Dudley oversaw ice Hockey at the 1960 Winter Olympics on behalf of the IIHF.

George Dudley was inducted to the builder category of the Hockey Hall of Fame in 1958.

George Dudley was posthumously inducted into the Midland Sports Hall of Fame on October 12, 1996.