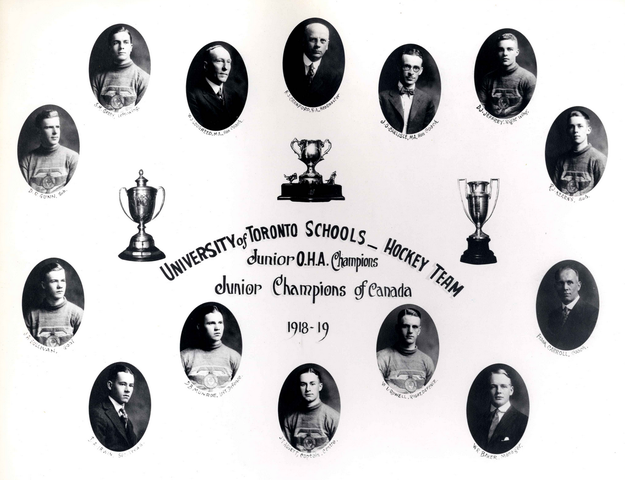 1st Champions of the Memorial Cup.

The Ontario Hockey Association’s annual meeting was unanimous that a fitting memorial be established to members of the OHA who had fallen on the field of war. "Past President Capt. J.T. Sutherland, now in France, spoke of the splendid work done by Canadian boys in France and suggested the erection of a suitable memorial to Hockey players who have fallen."—The Globe, Toronto, Ontario, Dec. 9, 1918.

In 1919 the Ontario Hockey Association donated the Memorial Cup, to be awarded to the Dominion's junior champions, to honour the young men and women from Canada who paid the supreme sacrifice for their country in World War I.

The University of Toronto Schools met the Regina Patricias on March 19 and 22 of 1919 in the first Memorial Cup and both games of the two game total goal series were played at the Toronto Arena Gardens.
The University of Toronto Schools outscored the Patricias 29 to 8 to win the first Memorial Cup.
Game 1 - 14 to 3
Game 2 - 15 to 5
For the record, the Memorial Cup-winning goal was Toronto's ninth one in the opening game. It came from Jack Aggett early in the third period.

W.J. Finlay, sports editor of the Winnipeg Free Press, reported prior to the first game: “Toronto fans are greatly worked up over their juniors and they are just a little afraid that their favorites are going to get beaten.
“However, it looks like a great game and, in our opinion, should be in doubt right to the finish.”
It was anything but in doubt as the U of T Schools opened with a 14-3 victory, causing Finlay to write: "Travelling at a dizzy pace from start to finish and uncorking team play that was revelation to the western fans, the University of Toronto Schools nifty young Hockey machine cantered through the Regina Patricians in such a commanding style that they not only swamped the westerners 14-3 but outclassed them from stem to stern ...”
Toronto, coached by Frank Carroll, a noted coach in his time, led 2-0 after the first period and 7-2 after the second.
As Finlay noted: "The Toronto outfit has the six-man Hockey system as used by the professionals down to a science and they have the ability to make use of the system to perfection. Coached by Frank Carroll, the noted Toronto professional pilot, the boys have developed team play that was really pretty to watch.”
Forwards Don Jeffreys and Jack Aggett scored six goals each for Toronto, with defenceman Dunc Munroe adding the other two. Regina got goals from two wingers — Laudas Dutkowski, who was known as Duke and who, late in his life, dropped the ‘k’ from his surname, and S. Conrad — and defenceman M.A. Wingham.

It's worth noting that the game was an hour and 15 minutes late in starting, as The Canadian Press reported, "to allow the fans to greet the 4th C.M.R., the first Toronto unit to come home in a body.”
The Canadian Press also reported: "It was not known tonight whether the Patricias would default the second game on Saturday night. It is a moral certainty that they cannot pull down the lead.”

Give the Patricias credit — they showed up for the second game on March 22. This time Toronto posted a 15-5 victory to win the series by a combined score of 29-8.
"Though the score was trebled on them the Pats played much better hockey than they did on the opening night and the score is no indication of the play,” wrote Finlay.
Getting glowing reviews was Mordecai Brown, the Regina goaltender who it was said was only 16 years of age.
Toronto, which led 8-4 and 10-4 at the period breaks, got five goals from Steve Greey, four from Munroe, and three each from Jeffreys and Aggett.

It's also worth noting that Lou Marsh, a noted sports writer with the Toronto Star, officiated both games, while Finlay — yes, the same Free Press sports editor — teamed with Marsh for the second game.
As Finlay's report noted: "Two sporting scribes, Billy Finlay of the Free Press, Winnipeg, and Lou Marsh, of the Toronto Star, handled the game, which was very clean.“