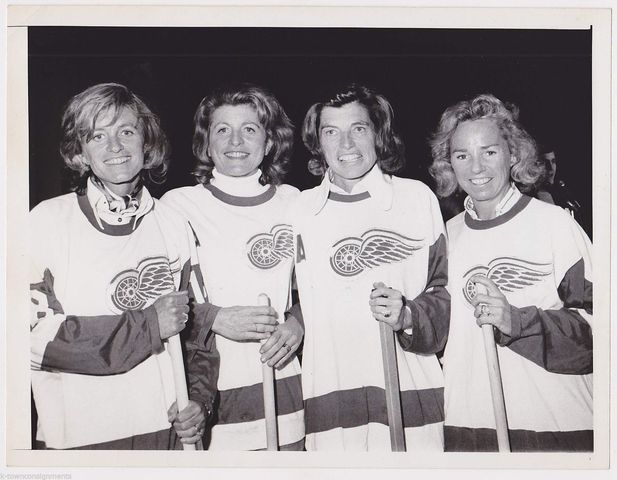 Following the exhibition match Senator Edward Kennedy presented a Special Award to National Hockey League President Clarence Campbell in recognition of NHL sponsorship of the International Floor Hockey Tournament to be held in the summer of 1974.

Patricia Helen "Pat" Kennedy Lawford (May 6, 1924 – September 17, 2006) was an American socialite and the sixth of nine children of Rose and Joseph P. Kennedy, Sr. She was a sister of President John F. Kennedy, Senator Robert F. Kennedy, and longtime Senator Ted Kennedy.

Eunice Mary Kennedy Shriver, DSG (July 10, 1921 – August 11, 2009) was a member of the Kennedy family, sister of President John F. Kennedy and Senators Robert F. Kennedy and Ted Kennedy. Eunice Kennedy Shriver was the founder in 1962 of Camp Shriver which started on her Maryland farm known as Timberlawn and, in 1968 evolved into the Special Olympics. Her husband, Sargent Shriver, was United States Ambassador to France and the Democratic vice presidential candidate in the 1972 U.S. presidential election.

Ethel Skakel Kennedy (born April 11, 1928) is an American socialite. She is also the widow of Senator Robert F. Kennedy and a prominent member of the Kennedy family. She founded the Robert F. Kennedy Center for Justice and Human Rights, a nonprofit charitable organization that works to realize Robert Kennedy's dream of a peaceful and just world by advancing human rights. In 2014, President Barack Obama awarded her a Presidential Medal of Freedom.