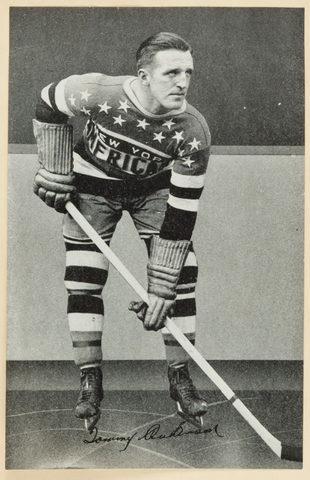 Tommy Anderson - New York Americans - 1936
July 9, 1910 – September 15, 1971 was a Canadian Professional Ice Hockey defenceman who played 8 seasons in the National Hockey League for the Detroit Red Wings and the New York/Brooklyn Americans. He was born in Edinburgh, Scotland and raised in Drumheller, Alberta.

Anderson recorded three goals and two assists during the 1935-36 season as a teammate of Hall of Famers Sweeney Schriner, Nels Stewart and Roy Worters.

Anderson played in the National Hockey League from 1934 to 1942. He played his first season for the Detroit Red Wings and his last seven for the New York/Brooklyn Americans.

For the 1941-42 season, Anderson switched positions from left wing to defence. The Americans finished last in the NHL, but Anderson had 41 points to set the league record for a defenceman. He also won the 1942 Hart Trophy as the NHL's most valuable player, becoming the first player to win the award while on a team that missed the playoffs. That was Anderson's last season in the NHL.

He was the last Hart Trophy winner to play for a non-Original Six team until 1973, when Bobby Clarke of the Philadelphia Flyers won the award. Anderson is one of the three (alongside Al Rollins and Eric Lindros) to win the Hart memorial trophy and not get selected to the Hockey Hall of Fame.