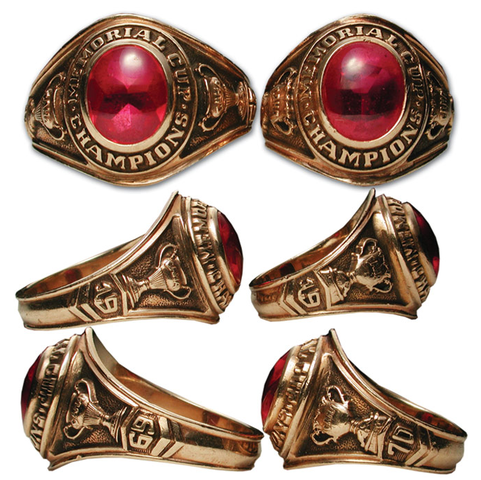 Lovely gold rings commemorate the Montreal Junior Canadiens' championship seasons of ‘68-69 and ‘69-70 and were presented to forward Bob Guindon. Captained by Rejean Houle, Montreal defeated the Regina Patricias for the Canadian junior title in ‘68-69 before defending the title the following year (with Gilbert Perreault as captain) against the Weyburn Red Wings. With a choice between ordering a man's or woman's ring, Guindon the second time around did indeed think of the lady in his life, resulting in this his and hers lot. Both rings feature red stones surrounded by "Memorial Cup Champions". Raised images of the championship trophy are at each side with "19" and either "69" or "70" below.