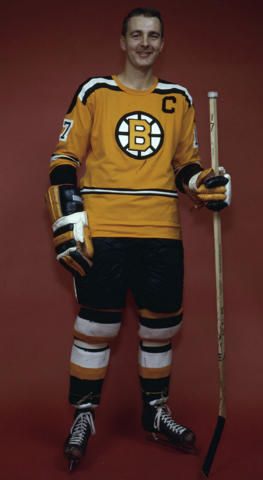 Don McKenney attained captaincy of the Boston Bruins in 1961, centering longtime teammates, John Bucyk and Doug Mohns. McKenney`s leadership could not prevent the faltering Bruins from a terrible downfall, as the proud franchise, bereft of many 1950s stalwarts, unsettled by ill-fated transactions, rueful demotions and a costly accent on youth, abruptly stumbled into a long and dismal period of hapless reconstruction. This precipitous reversal of fortune signaled the club's protracted nadir, as it cast a shadow on both the team's previous standing and their new captain's destiny. In retrospect, Don McKenney performed on some of the best and worst editions of the Boston Bruins. At the time of his trade to the New York Rangers for forward Dean Prentice in 1963, Donald Hamilton McKenney ranked the 4th highest all time scorer in Bruins' history.