Clare's Tony Kelly with the Liam MacCarthy Cup in Shanghai 2013 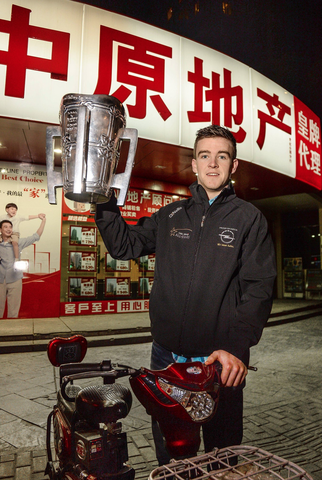 Here's Clare's Tony Kelly with the Liam MacCarthy Cup at a local market area near the team hotel on Minsheng Road, Shanghai, in advance of the GAA GPA All Star Tour 2013, sponsored by Opel, game on Saturday November 30, 2013.

The MacCarthy Perpetual Challenge Cup (commonly referred to - and incorrectly spelled - as the McCarthy Cup) is a trophy awarded annually by the Gaelic Athletic Association to the hurling team that wins the All-Ireland Senior Hurling Championship.