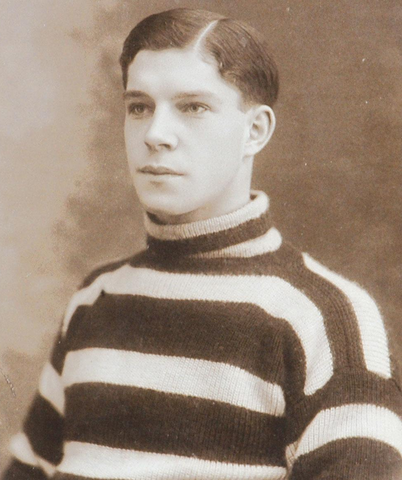 Hamilton Livingstone "Billy" Gilmour (March 21, 1885 – March 13, 1959) was a Canadian Professional Ice Hockey player - At 15, Gilmour played for the Ottawa Aberdeens in the Canadian Amateur Hockey League intermediate division. He played two seasons with the club and joined the Ottawa Hockey Club for the 1903 season, where he played with his brothers Suddy and Dave. He scored seven goals in six games and was a member of the Stanley Cup championship teams that were nicknamed the Silver Seven - Later in 1903, Gilmour moved to Montreal to attend McGill University, where he played college Hockey, and joined Ottawa for some Stanley Cup challenge games in the 1904 and 1905 seasons and a league game in 1906. After finishing McGill in 1907, Gilmour played one season with the Montreal Victorias, scoring five goals in ten games. Gilmour was named to the Montreal City Hockey League first All-star team in 1907 and was an Eastern Canada Amateur Hockey Association first team All-star in 1908 after finishing the season with 11 goals in 11 games. Along with his scoring prowess, Gilmour was regarded as one of the greatest stickhandlers of all time. He returned to Ottawa to join the now-professional Ottawa Hockey Club for the 1908-09 season, scoring nine goals in eleven games as Ottawa won the league and another Stanley Cup championship. In 1909, Gilmour moved to Montreal, married and stopped playing competitive Hockey. Gilmour did play some exhibition games for the Ottawa New Edinburghs in 1911, and played two games with the Ottawa Senators of the National Hockey Association / NHA in 1916 - During WW1 Lieut Gilmour was commissioned at Valcartier in the 1st Construction Battalion, Canadian Expeditionary Force - Billy Gilmour was inducted into the Hockey Hall of Fame in 1963