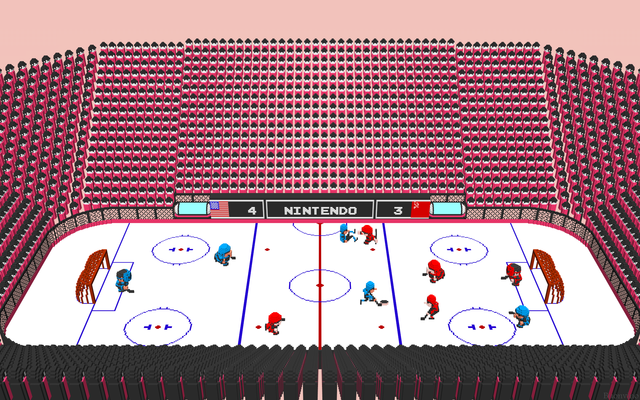 Who else remembers the 8-bit Nintendo game Ice Hockey? This 3-D render is dedicated to my older brother; he and I would play against each other for hours on end, back in '88. It's still one of my favorite 2-player sports games ever.

* Here's an alternate, angled version you may prefer over this version:

This is the first 3D NES render since Excitebike that I'm actually proud of. I chose USA vs USSR as the teams because of the "Cold War/Miracle On Ice" events & their implications on the 1980s, the NES era; it seemed fitting. If anyone wants to see other countries battling it out, I could throw alternate team renders in my scraps section.

I had to make several separate renders of just the fans in the seats, and then splice the rendered crowd into the main render, piece by piece. The ridiculously high polygon count of just the objects on the ice was enough to start choking my computer, so adding almost 3,200 fans was utterly impossible until I tried this 'splicing multiple renders together' method.