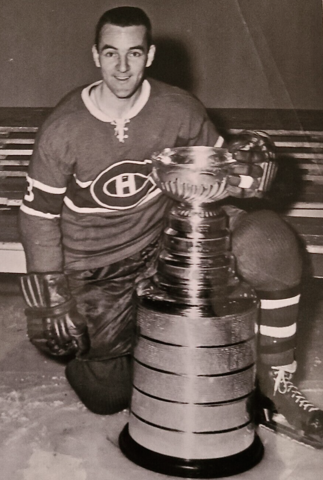 The Hull-Ottawa Canadiens would join the Eastern Professional Hockey League in 1959-60, and Tremblay would turn pro. He accumulated 25 goals and 56 points in 55 games and his effort garnered him the league's most valuable player honors. He also made his NHL debut with Montreal on October 10, 1959 vs Detroit Red Wings at The Forum in a 1-1 tie - he assisted on the Canadiens goal scored.

Tremblay played 11 games for the Montreal Canadiens that season and the following season he was called up to the parent club for 29 games, (including 5 playoff games), and also payed 37 games with Hull-Ottawa (scoring 40 points). He scored his 1st NHL goal vs Johnny Bower of the Toronto Maple Leafs on January 25, 1961 at 4:55 of the 1st period at Maple Leaf Gardens in a 5-3 Toronto win.

Tremblay joined the Canadiens full time for the 1961-62 season, and went on to play in all 70 games for the Canadiens, scoring 3 goals and adding 17 assists. In the next three years Tremblay’s points were 18, 21, and 20.

The 1965 playoffs represented Tremblay’s coming out party. J.C. led all playoff scorers with 9 assists in 13 playoff games as the Canadiens won their first Stanley Cup in five years defeating the Chicago Black Hawks. With a Stanley Cup win, part of the burden seemed to be removed from Tremblay, as he finally began to fulfill his potential and gain the acceptance of the demanding Montreal fans. He was equally brilliant the following season when he scored 11 points in 10 playoff games to help the Canadiens repeat as Stanley Cup champions against the Detroit Red Wings. Following the series, Tremblay thought he would win the Conn Smythe trophy as playoff MVP. Instead the honor went to the Red Wings goalie Roger Crozier in a losing cause.

In trying to explain Tremblay’s lack of recognition later on, Jean Béliveau wrote that J.C. was “essentially a shy man, a bit of a loner, who, like a bear, would growl to keep people away.” But Béliveau also went on to acknowledge that J.C. “was a very important cog in our machine.”

Prior to the 1970-71 season, the Canadiens were deciding which of their veteran defensemen to unload as part of a rebuilding program. Tremblay's desire to play for the club was under scrutiny for the first time. A proud competitor, he voiced his desire to stay with the Canadiens. That year Tremblay broke Doug Harvey's team record for single-season points by a defenseman. He totaled a personal high of 63 points, then went on to register 17 points in 20 playoff matches to help the Canadiens win the 1971 Stanley Cup championship. After the playoffs, he was named to the 1971 NHL First All-Star Team for the only time in his career. Another factor that helped Tremblay was when he relinquished the distracting task of being the team's representative in the NHL Players' Association.

For years J.C. played in the NHL and didn't put up great numbers until his 11th season. Then, when he reached his prime, he left the NHL to join a league which was mostly regarded to be of lower quality than the NHL. If he had stayed in the NHL he, as it turned out, would have won 4 more Stanley Cups and be part of what many believe is the greatest team of all time (the 1976-79 Canadiens). Who knows how good the Canadiens defense would have been if Tremblay was added to the big three of Serge Savard, Larry Robinson, and Guy Lapointe?

An arena is named after him in La Baie, Quebec (Now part of the City of Saguenay)