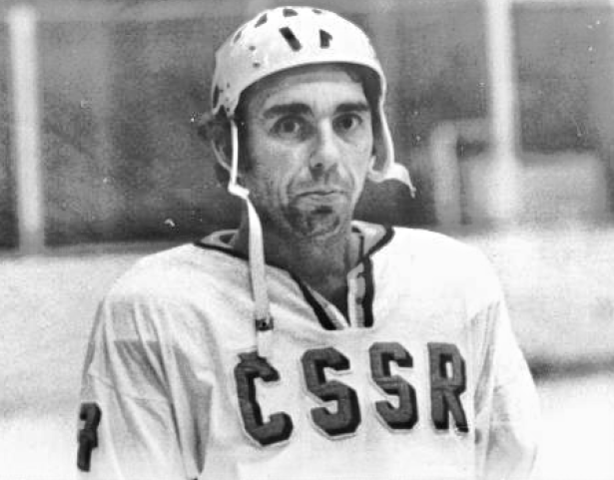 Suchý learned to play Hockey from his hometown club Jiskra Havlíčkův Brod, playing there until the age of 19. He then played for the Czechoslovakian army team Dukla Jihlava from 1963 to 1979, during which time he helped them win seven Czechoslovakian league titles. He scored 162 goals for Dukla Jihlava in 562 games.

Suchý won the scoring title in the top Czechoslovak league in 1968/69, a feat no other defenceman has done before or since.

Suchý was a standout player at the 1968 Winter Olympics in Grenoble, France with 2 goals and 4 assists, helping the Czechs win a Olympic Silver Medal.

Suchý would play in 160 games for the Czechoslovakian National Team, scoring 44 goals.

Jan Suchý scored one of the most important goals in Czech Hockey History, when on March 21, 1969 at the world championships in Stockholm, Sweden, Suchý scored the opening goal and eventual winner vs the Soviets (2-0) in the opening round of the championships. This was the first game between the 2 countries after the Soviet Union invaded and took control of Czechoslovakia. Every Czech was watching or listening to the game on radio.

Suchý was not shy to be his own person. He happily admitted to enjoying a beer and cigarette after the game, and sometimes a shot of alcohol before the game to get the blood flowing. In 1971, he was charged with driving under the influence after a car accident and was sentenced to nine months in prison. But he served the time and after being released continued his stellar career. This violation, however, forced him to miss the 1972 World Championship when the Czechs defeated the Soviets to win an historic gold medal, and playing in the 1972 Winter Olympics.

Jan Suchý is considered one of the best defenceman in the history of international Hockey.

Jan Suchý was inducted into the Czech Hall of Fame in 2008.

Jan Suchý was inducted into the IIHF Hall of Fame in 2009.