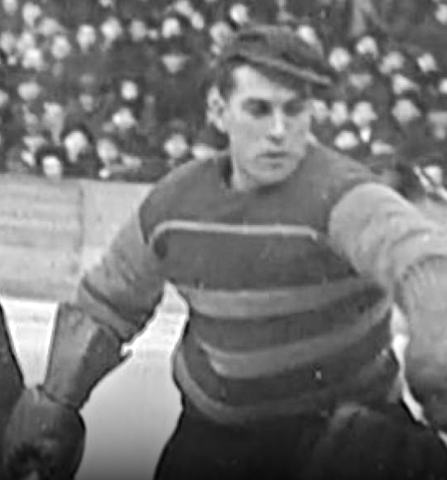 Modrý was one of the greatest goalies of all time. A natural born leader, that was known as the best European goalie in his times. His extraordinary popularity was enhanced by a unique personal charisma.

LTC Praha won the Spengler Cup in 1937, 1946, 1947, 1948, and runner up in 1938. While at the 1948 Spengler Cup, Modrý and his teammates were approached by Czech émigrés offering their chance to defect and pursue their Hockey dominance outside of Soviet influence. There were four defections.

Modrý even had the offer of a semi-pro contract in Canada. The Czechoslovak government promised him that if the team won the World Championship in 1949 they would allow him to go to there.

After the 1948 Spengler Cup, the Czechoslovak team had to cancel a trip to the US in order to go to the Soviet Union and help along the development of what was still a major new sport in the USSR. The more experienced Czech and Slovak players planted the seeds, laying the foundation for the Soviet Hockey program, of what would become a Hockey powerhouse throughout the Cold War. The USSR won its first World Ice Hockey Federation / IIHF World Championship in Stockholm in 1954.

Modrý was still a player with LTC Praha, and travelling as a delegate with the 1950 Czechoslovakia national team when, March 13th, 1950, the team was meant to go to London once again to take part in the world championship. But, at the airport players found out there would be no take-off.

Player Vaclav Rozinak told Czech Radio in 1968 the details of what had transpired.
"In London, we wanted to prove that the team was good, that the world title we won in 1949 had not been a coincidence. But, then some people appeared and said that we would not be going because visas for the reporters had not been obtained. Two days later it was clear we would have to stay. Of course, we were annoyed. The whole thing peaked at a pub when undercover [Soviet] secret police showed up. Somehow a fight broke out and we ended up at the police station. We thought it was all a joke and thought we'd only stay there over night. Even in court, when we were suddenly found guilty of treason and espionage, we laughed and didn't take the charade seriously. But the fun was over when we ended up in prison with our hair shaved off. We released then they truly were not going to let us go."

They were charged with making plans to defect to the West, and in October Modrý and eleven other players were convicted of treason. Modrý received the longest sentence, 15 years in prison, as the supposed leader of the potential defection plan.

Modrý served his prison time in Pankrác Prison in Prague and Bory Prison in Plzeň. He also served some of his time as a forced laborer in the uranium mines in Jáchymov, which was a place where political prisoners, such as suspect members of the Czech intelligentsia and World War II Czech RAF pilots as well as German prisoners from the war, were subject to extreme radiation in the uranium mines, guaranteeing them a certain death.

Modrý served 13 years of the 15 year sentence, dying in his hometown of Prague shortly after his release from incarceration.

In his final years, Modrý became the first European to produce material about special education for goaltenders, while also publishing articles about goaltending training.

Modrý has a street in Prague named after him.

Bohumil Modrý is a Honoured Member of the Czech Ice Hockey Hall of Fame, inducted in 2008.

At the 2010 Olympics, Czech goaltender Ondrej Pavelec paid tribute to the Czech legend and had Modrý's image painted onto the side of his mask.

Bohumil Modrý was posthumously inducted into the IIHF Hall of Fame in 2011.