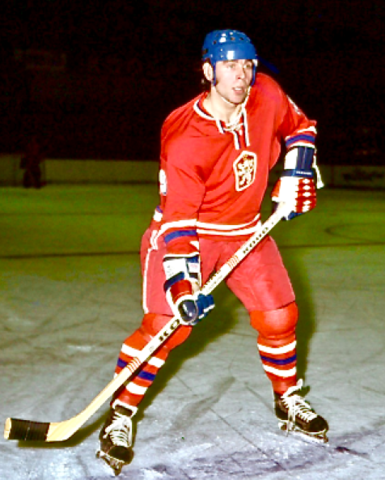 Bubla began playing as a forward, but was shifted to defense as a junior. His early career was spent with CHZ Litvínov and HC Dukla Jihlava, playing mostly with Litvinov from 1967-80. In 1977-78 he scored 50 points, including 21 goals, for Litvinov in 44 games. It was his best year in Czechoslovak Extraliga play, finishing 6th overall in the scoring race. In his brilliant career in the Czechoslovakian league Jiří scored 93 goals and 187 assists (280 points) in 470 games.

Bubla played for Czechoslovakia at the 1976 and 1980 Winter Olympics, winning a silver medal in 1976.

Bubla also helped Czechoslovakia to a runner-up finish at the 1976 Canada Cup.

In 1981 Bubla was granted permission to pursue a career in the West. When Jiří came to Vancouver he was 31 years old and didn't play as offensively as he had back home. At first the transition to a new lifestyle was tough, but not as tough as playing for a weak team. Injuries also limited Jiří's effectiveness but he showed flashes of brilliance and on many nights was Vancouver's steadiest defenseman.

His best offensive output while in Vancouver was in 1983-84. He had 6 goals and 33 assists in 62 games. During his last NHL season in 1985-86 Jiří played some of the best Hockey of his North American stint. He scored 30 points in only 43 games.

Bubla (and Hlinka) became the first Czechs to compete for the Stanley Cup in 1982 with Vancouver.

Bubla played 262 NHL games for the Vancouver Canucks, scoring 17 goals and 101 assists in regular season and 0 points in 6 playoff games.

After his playing career, Bubla became a European scout for the Canucks. But in April 1987, at the IIHF World Championships in Vienna, he was arrested and was later convicted of smuggling four kilograms of heroin out of Pakistan and into Canada via Austria, while he had been playing for the Canucks, and he served a five-year prison sentence in Austria for his involvement in an international heroin smuggling ring. He never carried drugs or used them but traveled to Pakistan where he oversaw the purchase and transport of four kilograms worth $ 2 million.

He was released from the Graz jail (Austria) after four years. The Griffiths family (Canucks owners at the time) and manager Pat Quinn helped Bubla return to Canada following his release from prison, and helped him get his life back in order. At first he and his wife were given a contract to clean the Pacific Coliseum, the home of the Canucks in those days. Later he would have his own cafe and trucking company. He has always been eternally grateful for the help the Canucks had given him.

Bubla was later a manager for his old club Litvínov until 2012.

Jiří Bubla was inducted into the Czech Hockey Hall of Fame in 2010.