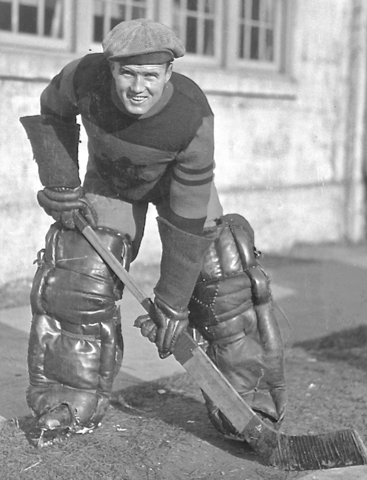 Andrew "Andy" Aitkenhead - Born March 6, 1904 in Glasgow, Scotland – Died October 21, 1968 in Multnomah County, Oregon was a Canadian/American ice Hockey goaltender. Aitkenhead came to Canada as a young child with his family, and grew up in Saskatoon, Saskatchewan.

Aitkenhead played all his early Hockey in Saskatoon. Records show he played with the Yorkton Terriers in 1921-22, Saskatoon St. George in 1922-23, and helped the Saskatoon Quakers in the 1923 Memorial Cup play-down tournament, playing 2 games for the Quakers.

Aitkenhead then joined the Saskatoon Nationals for the 1923-24 season, helping the Nationals reach the finals of the Northern Saskatchewan Senior Championships, losing to Eddie Shore and the Melville Millionaires.

Aitkenhead then joined the Saskatoon Empires, this time helping the Empires reach the finals of the 1926 Saskatchewan Senior Hockey League / SSHL, losing to the Regina Victorias.

The New York Rangers picked up Aitkenhead in the Inter-League Draft in 1928, and then sent him to the Springfield Indians in the Canadian-American Hockey League / Can-Am. He played 40 games for the Indians with a 13-14-13 record with six shutouts.

The Rangers had a solid goaltender in John Ross Roach, and decided to sell Aitkenhead to the Portland Buckaroos of the Pacific Coast Hockey League / PCHL, where he led the PCHL in wins (20), shutouts (16) and GAA (0,94) with the Buckaroos during 1929-30 season. He played 1 more season on Portland, only winning 12 games with 6 shutouts in 35 games played.

The Rangers then promoted Aitkenhead to the NHL for the 1932-33 season, becoming the Rangers starting goalie, playing his 1st NHL game on November 10, 1932 vs the Montreal Maroons in a 4-2 win to open the season. He would go 23-17-8 in 48 games with three shutouts, his 1st shutout coming on November 20 vs the Toronto Maple Leafs. Then, in the playoffs, Aitkenhead went 6-1-1 in the playoffs, with two shutouts, helping the Rangers win the 1933 Stanley Cup, where he shut out the Maple Leafs in the final game, which went into overtime.

Aitkenhead started the next season with the Rangers, going 21-19-8 with 7 shutouts. The Rangers then lost in the first round of the playoffs. He started the 1934-35 season with the Rangers, but after winning only 3 games to start the season, he was sent to the Philadelphia Arrows of the Can-Am league to finish the season winning the only game he played in. Aitkenhead played his final NHL game on December 11, 1934 vs the Maple Leafs.

Aitkenhead returned to the Portland Buckaroos, now in the North West Hockey League / NWHL. After 2 seasons in the NWHL, the Buckaroos rejoined the reconstituted four-team PCHL, and Aitkenhead backstopped Portland to league championships in 1937 and 1939.

Aitkenhead would retire in 1940.

Andy Aitkenhead was inducted into the Oregon Sports Hall of Fame in 1987.