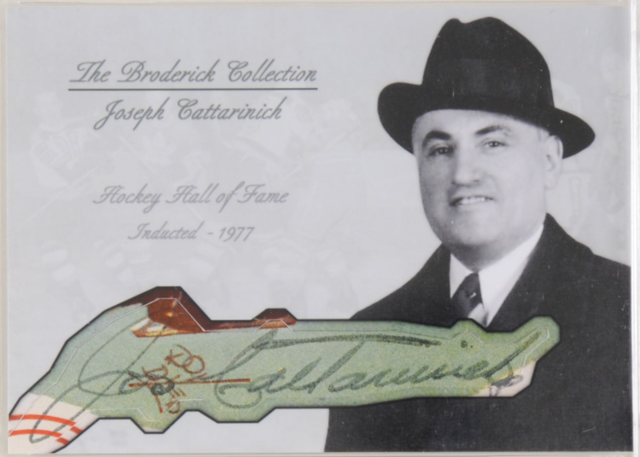 On the reverse of this card, it says;
The Broderick Collection
Joseph Cattarinich

With a keen business sense and a passion for sports, Joseph Cattarinich rose from the ranks of book-keeper to owner of the Montreal Canadiens.

Cattarinich also played for the Canadiens, in fact he was the clubs first goaltender. However after Georges Vezina and his Chicoutimi shutout Cattarinich's club in a preseason promotional game. Cattarinich recommended that the Canadiens sign the talented Vezina and stepped down from his place on the team. This selfless move for the betterment of the team was typical for Cattarinich.

On November 3, 1921, Cattarinich and business partners Leo Dandurand and Louis Latourneau purchased the Montreal Canadiens from the widow of the former owner George Kennedy for $11,000. Under this trio, the Canadiens became the most exciting team in the NHL and won three Stanley Cups.

He was inducted into the Hockey Hall of Fame in 1977.