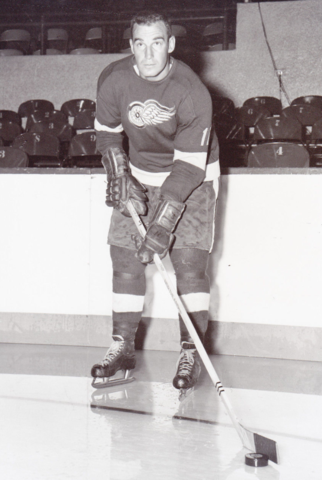 Aldcorn played his junior Hockey with the Winnipeg Monarchs from 1951 to 1954, then jumped leagues to join the Toronto Marlboros of the Ontario Hockey Association / OHA for the 1954-55 season, scoring 27 goals and 22 assists in 47 games. The Marlboros were coached by Turk Broda, who was a first year as coach. Aldcorn scored 4 goals and the Marlboros defeated the Regina Pats to win the 1955 Memorial Cup championship. In the off season, Aldcorn was part of two Manitoba All-Star lacrosse teams that competed in the finals of the Minto Cup in 1954 and 1955.

Aldcorn returned to Manitoba for the 1955-56 season, playing for the Western Hockey League / WHL Winnipeg Warriors, helping them win the 1956 President's Cup, as WHL Champions, then the 1956 Edinburgh Trophy championship.

The Toronto Maple Leafs acquired his rights in 1956, and played for parts of three seasons with the Maple Leafs. While he spent as much time in the minor leagues with the AHL Rochester Americans as he did in the NHL from 1956 through 1959, he did manage to score 15 goals, 18 assists and 33 points in 86 games NHL games. Aldcorn was selected for the AHL First All-Star Team in 1959.

The Detroit Red Wings claimed Aldcorn at the June, 1959 Intra-League draft. With Detroit, Aldcorn was often playing on the left wing with Gordie Howe, and that season was his finest in the NHL. He scored 22 goals and 51 points in 70 games.

Despite their one season success together, Aldcorn and Howe were broken up in 1960-61, and Aldcorn's numbers plummeted, scoring just twice in 49 games before being traded to the Boston Bruins with Murray Oliver and Tom McCarthy for Vic Stasiuk and Leo Labine.

Aldcorn returned to Manitoba in 1961, and played 5 seasons for the Winnipeg Maroons, and also went to school to get a Masters of Business Administration.

Aldcorn played with Canada's National team at the 1965 World Ice Hockey Championships at which Canada finished fourth, where he scored 5 goals in 7 games.

Aldcorn finished his Hockey playing career with the St. Boniface Mohawks as a player/coach, retiring after the 1968-69 season.

Aldcorn was a assistant coach for the Canadian National Team in 1969-70, and later worked in player development for Hockey Canada, and helped develop the National Coaching Certification Program for Hockey Canada.

Gary Aldcorn was inducted into the Manitoba Hockey Hall of Fame in 1997.

Gary Aldcorn was inducted into the Manitoba Sports Hall of Fame & Museum in 2016.