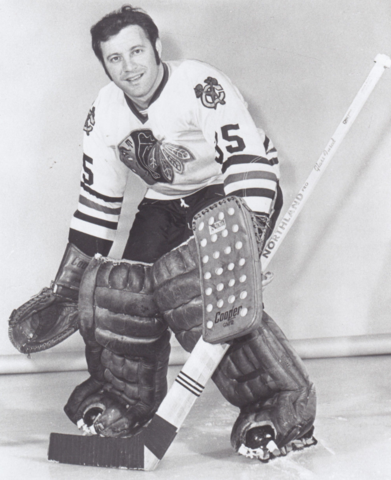 Esposito learned to play Hockey with his brother Phil in their family home driveway and basement.

He later played as a goaltender for St. Mary's College during his high school years, but quit playing goalie when he was seventeen years old to play football as a fullback.

Esposito then played college Hockey for Michigan Tech, and was a three-year Hockey letter winner, Esposito was a three-time first-team All-America selection. He was a driving force in helping the Huskies to the 1964–65 NCAA Championship and was named a first-team NCAA All-Tournament Team choice in 1965. Still currently the MTU career leader in goals against average (2.55) and second in career saved percentage (.912), Esposito was also a three-time All-WCHA first-team selection.

He first played in the NHL for the Montreal Canadiens during the 1968–69 season. He made his NHL debut against the Oakland Seals, playing 26 minutes in relief of Rogie Vachon. His first NHL start was against the Boston Bruins, then led by his brother Phil. The game ended in a 2–2 tie, in which Phil scored both goals for Boston and Tony made 33 saves. Esposito played thirteen regular season games, due to both Gump Worsley and Vachon being injured. However, Esposito returned to the minors when they both returned from their injuries. Worsley was injured again during the playoffs, so Esposito was called again. Tony Esposito served as backup to Vachon, dressing for all four games in the finals. As the Canadiens club was deep in goaltenders at that time, with Worsley, Vachon and other prospects in the system, Esposito was left unprotected by the Canadiens in 1969.

For the 1969–70 season, the Chicago Black Hawks claimed him from Montreal on waivers, known at the time as the "intra-league draft". Esposito had a spectacular season with Chicago, posting a 2.17 GAA and setting a modern day NHL record with fifteen shutouts, for which he won the 1970 Calder Memorial Trophy as the league's best rookie. He also was awarded the 1970 Vezina Trophy and was named to the NHL First All-Star Team at season's end. Esposito was also was runner-up for league MVP (Hart Trophy). It was during this record setting season he earned the nickname Tony 'O' for his shutout abilities.

In 1970–71, Esposito again proved to be one of the league's top goalies and helped Chicago finish first in the NHL's West division. The Black Hawks made it to the Stanley Cup Final, but lost in seven games to Montreal. The following season he posted the lowest GAA of his career (1.77) and shared the 1972 Vezina Trophy with backup Gary Smith. He was again selected to the NHL's First All-Star team.

Esposito was named to Team Canada for the Summit Series of September, 1972. He was the first goalie to earn a win against the Soviets, splitting Canada's goaltending duties with Montreal's Ken Dryden. Esposito posted both the lowest GAA and the highest save percentage of the three goalies (Esposito, Ken Dryden, and Vladislav Tretiak) who appeared in the series. Tony's brother Phil had an exceptional series as well and was the inspirational leader of the team.

Despite the loss of Bobby Hull, Esposito and the Black Hawks led their division in 1972–73, but lost the Stanley Cup in six games to Montreal. The 1973–74 season was another brilliant season with a sparkling 2.04 GAA and 10 shutouts. Esposito won his third Vezina Trophy, sharing it with Philadelphia's Bernie Parent.

The Black Hawks declined over the next few seasons although Esposito remained among the top netminders in the NHL. In the 1979–80 season, Esposito enjoyed a fine season with six shutouts and made the First All-Star team for the third time. In 1981, he became a naturalised American citizen and played for Team USA in the Canada Cup (he had previously represented Canada at the 1977 Ice Hockey World Championship tournament). He played a few more seasons in Chicago, retiring after the 1983–84 season.

Esposito was the first NHL Goalie to officially wear the number 35, a common number now worn by many Goaltenders. It was assigned to him during training camp prior to the Chicago Black Hawks 1969-'70 season due to the fact that the standard numbers 1 and 30 were already assigned, and after posting a shutout in his first ever exhibition game for the Black Hawks, he chose to keep wearing the number going on to a Hall of Fame career.

Esposito's number 35 was retired by the Chicago Blackhawks on November 20, 1988.

Tont Esposito was elected to the National Italian American Sports Hall of Fame in 1987.

Tony Esposito was inducted to the Hockey Hall of Fame in 1988.

Tony Esposito was inducted into Canada's Sports Hall of Fame in 2005.