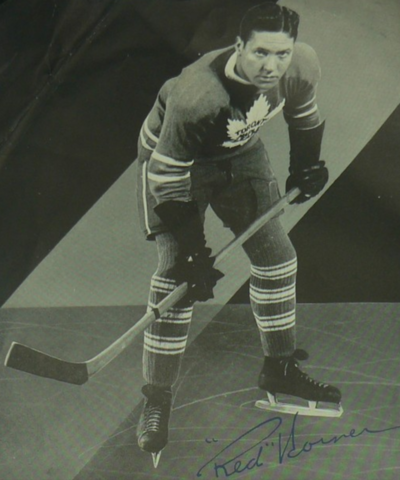 Horner was quick to come to one’s defence. While Dec. 12, 1933, at Boston Garden will forever be remembered as the night Boston’s Eddie Shore ended Ace Bailey’s career, Horner was front and centre. He had been pounding the Bruins’ leader with punishing bodychecks all night. Frustrated at one point in the second period after getting drilled, Shore mistook Bailey for Horner on his way back up the ice and violently upended the Leafs forward, slamming his head on the ice. (Emergency brain surgery would save his life, but Bailey would never play Hockey again.) While trainers, doctors and players tended to an unconscious Bailey in the Leafs’ end of the rink, Horner skated up to Shore, informed him that this behaviour would not be tolerated, and promptly laid him out with a single punch. "That was some kind of scene: Ace unconscious at one end of the ice, and Shore out cold at the other end. " Shore, who sustained a bloody scalp, received a 16-game ban while Horner was suspended for 6 games.

Horner helped the Leafs win their first Stanley Cup in 1932.