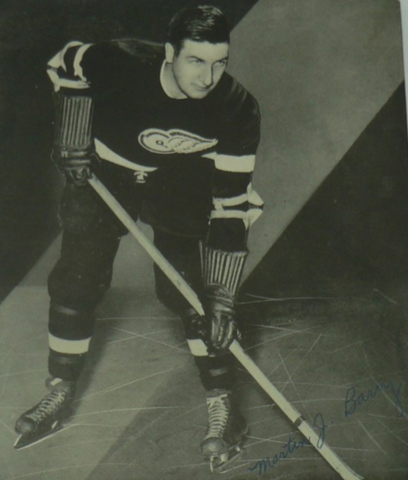 Barry grew up and learned to play hockey in Montreal. He played in the Mount Royal intermediate league with the Gurney Foundry team in 1922-23, with St. Michael's the following year and then with St. Anthony for two seasons after that. A proficient scorer, he was known by the local sportswriters as "Goal-a-Game" Barry.

After a strong season with the Montreal Bell Telephone team, he was signed by New York Americans manager Newsy Lalonde in 1927, but he played only nine games with the Amerks before they sent him down to the Philadelphia Arrows of the Can-Am league for conditioning. The next season, with the New Haven Eagles, he led that league with 19 goals and 29 points. Barry battled Art Chapman for the scoring title, which he ultimately won on the final day of the season.

The Boston Bruins claimed Barry from the Americans in the Intra-League Draft in May 1929, and from that point remained in the NHL. He missed only two games total in the following ten seasons. Barry recorded 18 goals an 33 points in 1929–30 for a Bruins team that set an NHL record with 38 wins in a 44-game season. Barry scored three playoff goals to help Boston eliminate the Maroons in the semi-final, but Boston was defeated by the Canadiens in the Stanley Cup Final. Barry rapidly developed into one of Boston's top offensive threats; he averaged 23 goals per season in his six years with the team. The Bruins named him team captain in 1933, led the team in goals for three consecutive seasons between 1931 and 1934 with 21, 24 and 27 respectively, and was the team's leading point scorer three times between 1932 and 1935. He was also among the league scoring leaders and finished seventh in the NHL with 37 points in 1932–33, fourth with 39 points in 1933–34 and eighth with 40 in 1934–35.

On June 30, 1935, Barry was involved in a blockbuster trade that sent him to Detroit while ex-Bruin Cooney Weiland came back to Boston. With the Red Wings, Barry formed one of the NHL's top forward units with Herbie Lewis and Larry Aurie.

His 40-point total in the 48-game schedule in 1935-36 placed him second in the league scoring race to Sweeney Schriner. The following season he recorded a career-high 44 points, was selected to the NHL First All-Star Team and was the first Red Wing to win the Lady Byng Trophy for gentlemanly conduct.

Barry played in the longest game in NHL history, a 1–0 victory over the Montreal Maroons that required six overtime periods to determine a winner on March 24, 1936.

The Red Wings defeated the Maroons in the playoff semi-final before defeating the Toronto Maple Leafs in the 1936 Stanley Cup Final to claim Detroit's first NHL championship. Barry scored a goal in the clinching game, a 3–2 Detroit victory. Barry was a central figure for Detroit as the Red Wings repeated as champions in 1936–37. He finished third in regular season scoring with 44 points, then led all players with 4 goals, 7 assists and 11 points in the playoffs. In the clinching victory over the New York Rangers in the 1937 Stanley Cup Final, Barry scored twice – including the Cup-clinching goal – and added an assist in a 3–0 victory, making the Wings the first U.S.-based team to capture back-to-back championships.

Barry was named to the NHL's First All-Star Team at centre and won the Lady Byng Trophy as the league's most gentlemanly player.

After a 1937–38 season in which Barry scored only nine goals, he returned to the NHL leader board by finishing fourth with 41 points in 1938–39. The Red Wings spent several months attempting to trade the 34-year-old Barry to the Canadiens. When Montreal feigned a lack of interest, Detroit eventually granted him his outright release and made him a free agent shortly before the 1939–40 season began. Two days after his release, the Canadiens signed Barry to a contract. His tenure with Montreal was short-lived, however. After scoring only four goals and 14 points in 30 games, Montreal released Barry from his contract. He signed on with the Pittsburgh Hornets of the International-American Hockey League (IAHL) to complete the year. Barry played his final season of professional Hockey in 1940–41 in the dual role of player-coach for the Minneapolis Millers of the American Hockey Association (AHA).

Marty Barry was selected to the Detroit Red Wings Hall of Fame in 1944.

Marty Barry was inducted into the Hockey Hall of Fame in 1965.