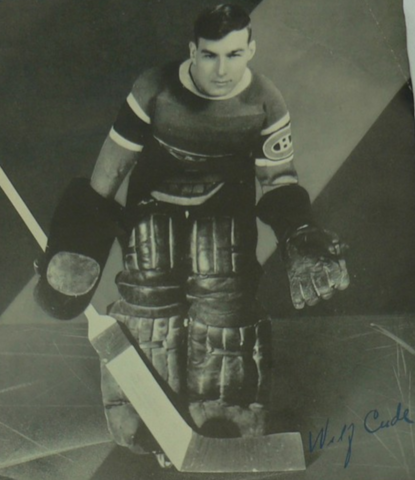 Born in Wales, Cude was raised and learned to play Hockey in Winnipeg, Manitoba.

Cude joined the Melville Millionaires of the Saskatchewan Senior Amateur Hockey Association in 1929, and was signed in February 1930 by the Pittsburgh Pirates and moved with that team to Philadelphia. He was the Philadelphia Quakers' goaltender during its only disastrous 1930–31 season. In 1931–32, with the Quakers having suspended operations.

Cude once had the distinction of being the NHL's spare goaltender, playing for whatever team needed backup. This was a distinguished spot in the 1930s when no more than 10 teams competed in any given year.

In 1933, the defunct Quakers traded Cude to the Montreal Canadiens who already had George Hainsworth as their star goaltender. Before the 1933–34 season, Hainsworth was traded to the Toronto Maple Leafs for similarly distinguished Lorne Chabot. Cude played one game for the Canadiens before he was loaned to the Detroit Red Wings, where he posted an outstanding campaign. He wound up leading the Red Wings to their first Stanley Cup Finals appearance, though they lost to Charlie Gardiner and the Chicago Black Hawks, falling three games to one in the best-of-five series. Cude also surrendered the first overtime goal clinching a Stanley Cup when he was scored on by Mush March at the 10:05 mark of the second overtime in Game 4. He posted a league-leading 1.52 goals against average for the year.

The Canadiens were so impressed by Cude's work with the Red Wings that they traded Chabot and made Cude their number one goaltender through the 1937–38 season. He split duties with Claude Bourque in 1938–39 and ceded the starter job to Bourque in 1939–40, and to Bert Gardiner in 1940–41.

Cude may also have been the lightest goalie in league history, tipping the scales at no more than 130 pounds.