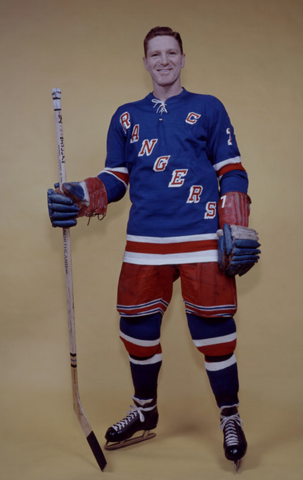 Sullivan played three years of Junior A Hockey with the St. Catherines Tee Pees from 1947-48 to 1949-50. In his final year, he played just 13 games for St. Catherines, spending much of the season in the American Hockey League with the Hershey Bears.

Sullivan was ushered into the pro ranks with the Hershey Bears in 1949-50. Along the way, he managed to take a quick swig of life with the Boston Bruins for 3 games before heading back to his home in the AHL. By 1950-51, Sullivan had settled into the pro game quite nicely. Appearing in all 70 games for Hershey, Red scored 28 and assisted on 56 for 84 points. He tied for fifth in the AHL for assists.

It wasn't until 1951-52 that Sullivan finally got a full-time job in Boston. But over the season and a half that followed, he failed to make a significant impression with the club's brass. By 1953, he was back in Hershey.

Sullivan became an AHL star at Hershey and in 1953-54 set a scoring record of 30 goals and 89 assists for 119 points in 69 games, and was honoured with the Les Cunningham Award as league MVP. and the John B. Sollenberger Trophy as AHL - Leading Scorer.

The 1953-54 Hershey Bears reached the Calder Cup finals before losing in six to the Cleveland Barons, despite outscoring their opponents 19-18 on the series. Sullivan was selected as a First Team All-Star and his way back to the National Hockey League was paved in gold.

Sullivan was traded to the Chicago Black Hawks by Boston for cash, on September 10, 1954, and with the Black Hawks is where Sullivan began to hit full stride with his knack for setting up goals, showing leadership, providing tenacious forechecking and an ability to needle his opponents with a truculent flair. He gave fans their money's worth for two seasons before being traded to the New York Rangers in June, 1956.

In the Big Apple, Sullivan picked up right where he left off in Chicago. He made a habit of stirring up trouble, especially against the Canadiens. He often took runs at goaltender Jacques Plante. Habs' defenseman Doug Harvey warned the abrasive Ranger centreman to lay off. When Sullivan failed to comply, Harvey speared him in the stomach with his stick and ruptured his spleen. "It was one of those situations where Harvey was paying me back for something I had done to him the night before. On this particular occasion, I had given it to him the night before when I kicked the skates right out from under him during a game. That's something you don't do. So I knew I was going to get it the next night. I just didn't expect to be speared, which is something you don't do either."

In 1957-58, he was appointed the team's captaincy, a post he held until his demotion to the minors in 1961. When Sullivan returned to the minors for 1961-62, he took on the dual role of player/head coach with the Kitchener-Waterloo Beavers of the EPHL. His 46 assists was good for fifth in the league. The Beavers placed third in the six team league and lost in the opening round of the playoffs to the Hull-Ottawa Canadiens in seven games.

The following year, 1962-63, Red was player/coach in the AHL for the Baltimore Clippers. On a team led offensively by Dave Creighton, Sullivan added 36 points in 31 games. However, after 31 games, Sullivan retired from Hockey as a player.

Sullivan played 556 regular season games in the NHL with the Boston Bruins, Chicago Blackhawks and New York Rangers. Over that time, he scored 107 and assisted on 239 for 346 points. Red played in five all-star games during his career, two with the Black Hawks and three with the Rangers.

Red left the Baltimore Clippers 31 games into the 1962-63 American Hockey League season to replace Muzz Patrick as head coach of the Rangers. 20 games into the 1965-66 NHL campaign, Sullivan was replaced behind the New York bench by Emile Francis. In any of those four seasons, the Rangers failed to reach the playoffs.

For the 1968-69 season, Sullivan returned to the NHL, this time as head coach of the Pittsburgh Penguins in their second year of existence. The team finished the year with just 51 points over 76 games. The Penguins tied the Minnesota North Stars for last place overall.

Red’s last kick at the head coaching can came in 1974-75. Jim Anderson coached the first 54 games in the inaugural season for the Washington Capitals with the team winning just four of those games. Sullivan replaced Anderson and the team had a slightly better winning percentage with two victories against 17 losses. Red was replaced before the end of the season by legendary Milt Schmidt.