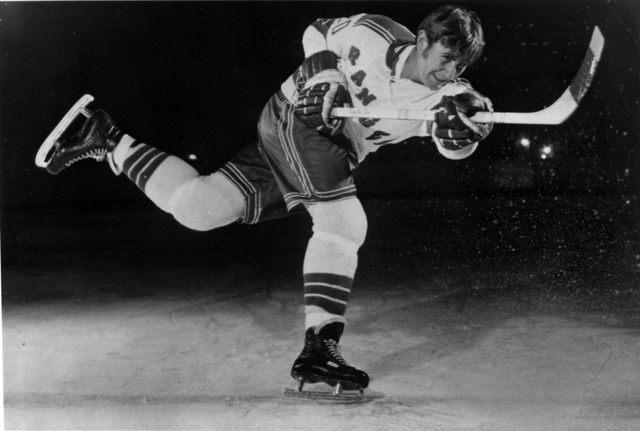 During his three seasons with the Kitchener Rangers of the OHA, Jack Egers was a big-time scorer, especially during his final campaign in 1967-68 when he led the league by scoring 53 goals.

Originally drafted in 1966 by the New York Rangers, Egars was dispatched to play for the Omaha Knights of the CHL the following season of 1968-69. In spite of a shoulder separation during his first campaign, he still managed to score 58 points in 59 games. In his second year, he was voted a league all-star on the strength of a 90-point season.

It was then time to join the Rangers at the NHL level. He entered the league with high expectations for success. His nickname was "Smokey," a reference to his ability to knock the sap out of the wood of his sticks with his rocket of a slapshot.

But his transition into the majors was not smooth. During a game against the North Stars, he let a shot go just over the blueline at goaltender Gilles Gilbert. Just as the puck took off, North Stars' defenseman Fred Barrett hit him with a thunderous check that caused him to hit his head on the ice. The hard impact caused him to swallow his tongue, putting his life at risk. Swift medical attention averted disaster although Egers was sidelined with a concussion for some time.

But long before any of those ingredients joined in harmony, the Rangers traded him to the St. Louis Blues in 1972 for the coveted rookie Gene Carr. With the Blues, Egers was placed on a line with Mike Murphy and Garry Unger. The mix suited Egers just fine as he enjoyed the two most prolific campaigns of his career.

By 1973-74, he was traded back to the Rangers for a brief time before the Washington Capitals claimed him in the 1974 NHL Expansion Draft.

Egars holds the distinction of scoring the first winning goal for the Capitals on October 17, 1974 against the Chicago Black Hawks.

Early in the 1975-76 season, Egars was dispatched to the minors where he eventually ended his career with the OHA-Sr Brantford Alexanders club in 1977.