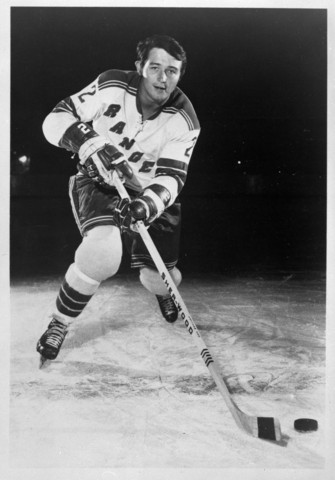 Park wasn't very physically strong in his teenage years and, unlike Orr, who was touted as a star from an early age, Park would sneak up on the hockey world rather than define it. One of his schools, the Catholic Neil McNeil high school, furnished the Toronto Marlboros of the Ontario Hockey Association with many of its young prospects. In 1965 Park and all but three of his teammates were invited to the Marlboros' training camp. Still physically small, Park escaped the notice of the Toronto coaching staff. He was preparing to play in the Junior B ranks when the Detroit Red Wings invited him to a junior camp. The Toronto Maple Leafs organization, which ran the Marlboros, got word of the invitation and put Park on its protected list. He joined the Marlies for most of the 1965-66 season.

Park gained weight, putting just under 200 pounds on his 6' frame, and his skating and puckhandling developed to the point that in the summer of 1966, just before the NHL Amateur Draft, he was considered a sure bet for the professional leagues. Park and his family were more modest and he expressed hopes of ending up with the Maple Leafs. Instead, he was chosen second overall by the New York Rangers.

Park stayed with the Marlies for two more seasons, becoming an outstanding defenseman and making the league's All-Star Team in 1968. At his first training camp with New York, he was shy and reluctant to mix openly with the more experienced Rangers. He was assigned to the Buffalo Bisons of the American Hockey League, where he played 17 games before returning to the NHL to stay.

Park quickly became the Rangers' best defenceman and drew comparisons with the great Bobby Orr, as both were credited with revolutionizing the "offensive" defenceman. Park's offensive skill, stickhandling and pugnacity attracted much attention from fans. Park and Orr occasionally fought each other on ice, and fans and sportswriters fueled the rivalry by making frequent comparisons, not least as the Rangers and Boston Bruins were bitter opponents. Years afterward, Park remarked "I saw no reason to be upset because I was rated second to Bobby Orr. After all, Orr not only was the top defenceman in the game but he was considered the best player ever to put on a pair of skates. There was nothing insulting about being rated number two to such a super superstar."

Park was made the alternate captain of the Rangers and briefly served as their captain. In 1972, despite the loss of leading team scorer Jean Ratelle with a broken ankle, Park led his team to defeat the defending champions Montreal Canadiens in the first round of the playoffs. The Rangers advanced to the Stanley Cup finals where they lost to Orr and the Boston Bruins, and Park finished runner-up for the Norris Trophy. When the upstart World Hockey Association tried to lure Park away, the Rangers re-signed him to a $200,000-a-year contract that made him, briefly, the highest-paid player in the NHL.

In the 1972 Summit Series, with Orr unable to play due to injury, Park emerged as a key contributor to Team Canada's series over the Soviets, finishing with five points in eight games, and being named the MVP of the deciding Game Eight and named Best Defenceman of the series.

In 1975–76, the Rangers got off to their worst start in ten years and the team began getting rid of their high-priced veterans. On November 7, 1975, one of the biggest trades of the era was made. Park, star centre Jean Ratelle and defenceman Joe Zanussi were traded to Boston for superstar scoring champion Phil Esposito and defenceman Carol Vadnais.

Park was a natural fit, his offensive skills meshing perfectly with the team's style of play. From 1977-79, Don Cherry's "Lunch Pail A.C." captured three division titles for the Bruins. Park earned two First All-Star Team selections, while coming in second in the Norris Trophy race twice in a Bruins' uniform, with 1977-78 being considered one of his finest seasons. In 1977 and 1978, Park was a key contributor to Boston's back-to-back appearances in the Stanley Cup Finals where they lost to the Montreal Canadiens both times. His last highlight with Boston came in Game 7 of the Patrick Division finals against the Buffalo Sabres in the 1983 playoffs, when Park scored the game-winning goal in overtime and help Boston advance in to the conference finals — Park's career overlapped with the first four years of the emerging superstar defenceman of the Bruins, Raymond Bourque, from 1979 to 1983.

Twice Park was second in the voting for the Norris Trophy while he played in Boston, beaten out both times by the emerging Denis Potvin of the Islanders.

The following season Park signed with the Detroit Red Wings as a free agent and won the Bill Masterton Trophy for perseverance that same year, having set a record for assists by a Red Wings' defenceman as he collected 53 assists in 1983-84. After the 1985 season, still an effective player but hobbled by repeated knee injuries, he announced his retirement. The next year he briefly served as Detroit's coach, winning only nine of 45 games before stepping aside.