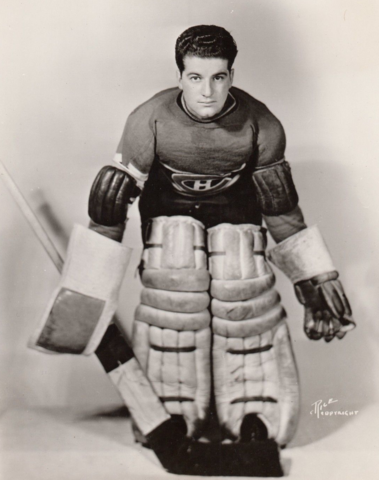 As a young teenager, goalie Claude Bourque played in the New Brunswick Amateur Hockey Association with the Moncton St. Mary's. He also dressed for his high school team and the Moncton Red Indians where he played in eight Memorial Cup games in 1933, going 6-1-1. He then spent the final two years of his junior eligibility in Montreal tending goal for the Junior Canadiens.
Bourque began playing senior hockey in the fall of 1935, playing with the Montreal Senior Canadiens, the Montreal Royals and the Verdun Maple Leafs. Heading into the 1938-39 season his NHL rights were owned by the Montreal Maroons but in September he was traded to the crosstown rival Canadiens for cash. The trade turned out to be a positive for Bourque who was given the opportunity to play in net for the Habs in 25 games, where he posted a 7-13-5 record. Although it was rather uncharacteristic, the Canadiens were somewhat lean in goaltending talent during those years and so Bourque returned as the number one goalie the following year, despite a dismal rookie season record. Unfortunately for Bourque and the Habs, season two was no better. He was between the pipes for 36 games, going 9-24-3. He was also loaned to the Detroit Red Wings for one game that year, replacing the injured Tiny Thompson for a game on February 15th. Bourque and the Red Wings came out on the short end of a 3-1 score against the New York Rangers, who eventually went on to win the Stanley Cup.

In April, 1940 the Canadiens decided to move in a new direction in goal and traded Bourque to the New York Rangers for Bert Gardiner, although he never again played in the NHL. He played two of his last three years in the AHL with the Philadelphia Ramblers and Buffalo Bisons, where he was named a Second Team All-Star, before winding down his career with the Lachine RCAF in 1942-43.