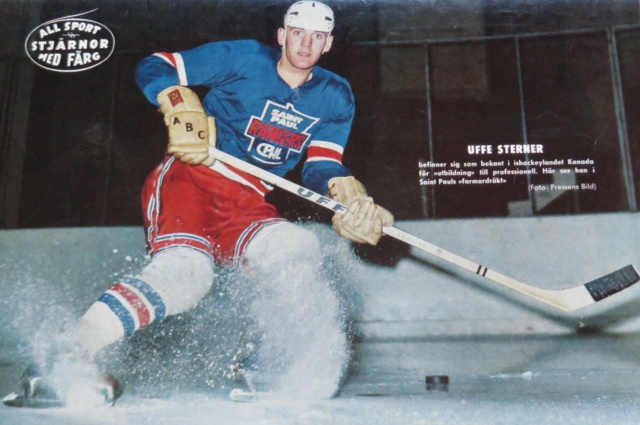 Sterner played for the St. Paul Rangers of the Central Hockey League with 12 goals and 21 points in 16 games.

In the two months in the Central Hockey League, Sterner had adjusted, made tremendous strides, and was promoted to the Baltimore Clippers of the AHL. Sterner played well in Baltimore, and early in the new year he was called up to the New York Rangers to play in the NHL.

Sterner made his NHL debut on January 27, 1965 vs Boston. He then played on January 30 vs Montreal, January 31 vs Detroit and February 3 vs Chicago.

Sterner stayed only four games without registering a point before being returned to the minors. The Bruins had played physically against him, and he refused to play a similar style. He was equally reluctant to instigate physical play.

Sterner's debut for the New York Rangers in 1965 made him the first European to play in the NHL.

During his career in the AHL he posted very fine statistics—18 goals and 44 points in 52 games.