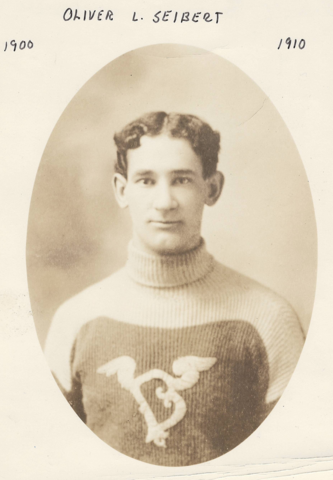 Seibert was, by reputation, a very fast skater and versatile player. He actually began his Hockey career as a goaltender, but he switched to centre by the time he stepped on the ice with Berlin in the Western Ontario Hockey Association in 1900.

Seibert first played senior-level Hockey with the Berlin Rangers / Berlin Hockey Club in the Western Ontario Hockey Association / WOHA in 1900. He played two years with Berlin before switching to Guelph for 1902. He returned and played one further seasons for Berlin. He was a member of Western Ontario Senior championship teams for 1900, 1901, 1902 and 1904.

Seibert was one of the first to use the wrist shot.

The Berlin Hockey Club team played an exhibition game in St. Louis, Missouri; it is considered one of the first games of ice Hockey played on artificial ice.

After the WOHA was absorbed into the Ontario Hockey Association (OHA), Seibert was declared ineligible to play in the OHA on December 30, 1904, which eliminated the possibility of play in Ontario.

Seibert was one of the first players to turn professional in 1904.

On January 31, 1905, Seibert signed with the Sault Ste. Marie based professional team The Canadian Soo of the International Professional Hockey League / IPHL for $30 per week and board. He only played one game with the Soo, suffering a season-ending broken leg in his first game against Calumet on February 2, 1905.

Oliver Seibert was inducted into the Hockey Hall of Fame in 1961.

Seibert is also an inductee in the Waterloo Region Hall of Fame.

His son, Earl Seibert, is also an honoured member of the Hockey Hall of Fame, and the Waterloo Region Hall of Fame.

The Seiberts were the first father/son combination to be elected into the Hockey Hall of Fame as players.