Sutter Brothers with their mom Grace, holding the Stanley Cup 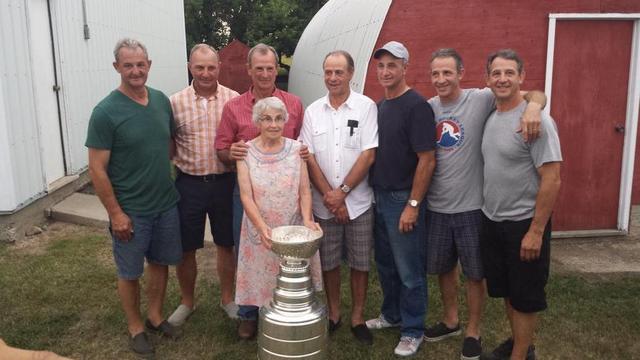 Sutter Brothers - Gary, Brian, Darryl, Duane, Brent, Ron & Rich, with their mother Grace, who is holding the bowl of a family tradition - The Stanley Cup.

The Sutter family, originally from Viking, Alberta, Canada, are one of the most famous families in the National Hockey League (NHL). Six brothers: Brent, Brian, Darryl, Duane, Rich and Ron, reached the NHL in the 1970s and 80s. Four brothers, Brian, Duane, Darryl and Brent, have gone on to become coaches and general managers as well. All brothers played either for the Chicago Blackhawks or the St. Louis Blues at one point or another. A seventh brother named Gary is said by his brothers to have been the best hockey player of all seven boys. Rather than making his living as a Hockey player, Gary stayed home to work on the family farm.

Six brothers took the same path to the NHL. Each player began their junior careers with the Red Deer Rustlers of the Alberta Junior Hockey League before moving onto the Western Hockey League's Lethbridge Broncos. A seventh brother, Gary, was offered a tryout with the Rustlers at the same time Brian was, however he declined, choosing not to pursue a career playing Hockey professionally. Gary's brothers have suggested that he may have been the best player of all of them.

WHO ARE THESE Sutter Brothers

Gary Sutter was also a good Hockey player, and when he was 17 years old, he decided not to accept a invitation to the Red Deer Rustlers, and instead stay at the family farm. Others have said it was a girl, and Gary did get married first out of the boys, and he moved to Edmonton for a few years, but ultimately, Gary made the decision, and has quoted this in the past - “Even though I was an outstanding 14-year-old, when I was 17, I honestly felt in my mind that I wasn’t good enough,” Gary says. “The guys that played in the NHL when I was young, they were icons.”

Brian Sutter was drafted by the St. Louis Blues 20th overall in the 1976 NHL Entry Draft and by the Edmonton Oilers 36th overall in the 1976 WHA Amateur Draft. He played 12 seasons, all with the St. Louis Blues, appearing in three All-Star Games before becoming a head coach with the Blues, Boston Bruins, Calgary Flames and Chicago Blackhawks. Brian won the Jack Adams Award as best coach in 1991. He also was the runner-up with the Blackhawks in 2002. His #11 is retired by the Blues. Brian was the director of pro personnel for the Calgary Flames organization until he took the head coaching position with the Bentley Generals of the Chinook Hockey League.

Darryl Sutter was the lowest draft pick of the family, waiting until the 11th round, 179th overall, before being selected by the Chicago Blackhawks in the 1978 NHL Entry Draft. Darryl's playing career was cut short by injuries in 1987 after which he turned to coaching. Darryl spent 11 seasons coaching the Blackhawks, San Jose Sharks and Calgary Flames – leading the latter to a surprising run to the 7th game of the Stanley Cup Finals as both the coach and General Manager in 2003–04. He replaced Terry Murray as the Los Angeles Kings head coach on December 17, 2011. He led the Kings to their two Stanley Cup Championships in 2012 and 2014.

Duane Sutter was selected by the New York Islanders, 17th overall, in the 1979 draft. He won the Stanley Cup in his first four seasons with the Islanders. Duane also briefly coached the Florida Panthers from 2000–02. Duane Sutter is currently a pro scout for the Edmonton Oilers.

Drafted in the first round, 17th overall by the New York Islanders in 1980 NHL Entry Draft, Brent Sutter had the most success in the NHL, playing 1111 games and recording 829 points. He won the Stanley Cup twice with the Islanders in 1982 and 1983 along with his brother Duane. After finishing his NHL career, he bought the WHL's Red Deer Rebels where he also formerly served as the Rebels' Head Coach and General Manager. Brent led the Rebels to the Memorial Cup in 2001. He also became the first coach to lead Canada to consecutive gold medals at the World Junior Ice Hockey Championships, which he did in 2005 and 2006. In 2007, Brent left his posts with the Rebels to become the head coach of the New Jersey Devils. On June 23, 2009, he was hired as the head coach of the Calgary Flames. On April 12, 2012, he and the Flames came to an agreement for him to leave the club.

Ron Sutter was the highest draft pick of the family, taken 4th overall by the Philadelphia Flyers in 1982 – six spots ahead of his twin brother Rich. Ron played for seven teams during his NHL career. Ron finished his career with the Calgary Flames in 2000–01. Rich and Ron spent three seasons together with the Flyers in the mid 80s, and three more with the Blues in the early 90s. As a San Jose Shark, Ron was coached by brother Darryl. Ron is the only brother who did not play or work for the Chicago Blackhawks.

Rich Sutter, twin brother of Ron, was drafted 10th overall by the Pittsburgh Penguins in the 1982 NHL Entry Draft. He led the Lethbridge Broncos to a WHL championship in 1983 and a Memorial Cup appearance. Rich played 874 games with seven teams during his 13 year career. Rich is the only Sutter brother to have neither played for nor worked for the Flames.

Grace Sutter, the boys' mother still resides in the Viking area and is active in church and her family activities. The brothers' father, Louis John Sutter, died on February 10, 2005, at the age of 73, following a lengthy illness.