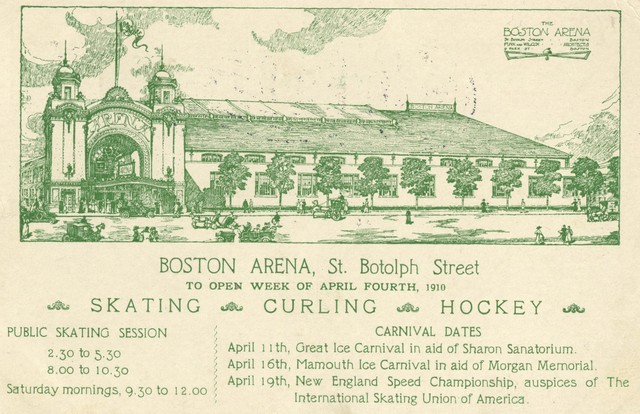 Boston Arena / Matthews Arena is the oldest multi-purpose athletic building still in use in the world.

The Arena was purchased in 1979 by Northeastern University. The Arena was renamed in 1982 when Northeastern alumnus George J. Matthews helped fund its refurbishment. The arena was briefly known as Northeastern Arena as well. A 1995 renovation expanded the ice surface from 200 by 80 to 200 by 90 feet (61 × 24 to 61 × 27 m).[2] The most recent renovations took place in the summer of 2009. The center-piece of the renovations were all-new seating and a brand new center ice jumbotron. The lobby was also reworked, with additional concessions and an elevator for ADA compliance. A new weight room and expanded locker rooms were provided for the athletes. The total cost of the renovations was estimated at $12 million.

Matthews Arena has played host to many famous people and events during its lifetime. Matthews hosted every president from Theodore Roosevelt in 1912 to John F. Kennedy in 1946. Other dignitaries to hold events at the arena include Charles Lindbergh and Amelia Earhart. Boxing was once a mainstay at the arena and hosted bouts with Jack Dempsey, Gene Tunney, Joe Louis and Marvin Hagler. Muhammad Ali trained at what was called Santos Gym, where the Varsity Club now sits, for his second bout with Sonny Liston. Professional wrestling events were also staged there. In the 1950s the arena also hosted the Rodeo led by Roy Rogers and Dale Evans.

Matthews Arena also proved famous as a concert venue during much of its lifetime. A 1958 concert hosted by Alan Freed was cut short due to riots. Playing the concert were Jerry Lee Lewis and Chuck Berry. Freed was arrested after issuing the famous line, "The police don't want you to have fun." Other famous acts to grace the arena were The Doors in a 1970 concert that was later released to the public. Another famous concert was the Phish New Year's Eve concert on December 31, 1992. The show was the highest attended Phish concert to date and was played on WBCN the next day.

Matthews has hosted all or part of the America East Conference men's basketball tournament a total of seven times and hosted the 1960 Frozen Four. The arena also served as the original home to the annual Beanpot tournament between Boston's four major college Hockey programs.

Today, Matthews Arena is home to the Northeastern Huskies men's and women's ice Hockey teams, and men's basketball team as well as the Wentworth Institute of Technology's men's ice Hockey team and various high school ice hockey programs in the city of Boston.