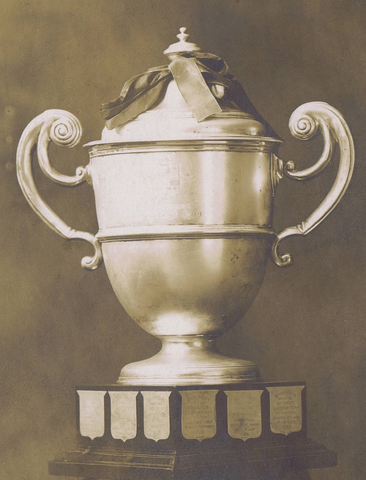 The Minto Cup is awarded annually to the champion junior men's lacrosse team of Canada.

It was donated on March 16, 1901 by the Governor-General of Canada, Lord Minto - Sir Gilbert John Murray Kynynmond Elliot, 4th Earl of Minto.

The Ottawa Capitals were handed the cup in 1901 as its first holders on account of being champions of the National Lacrosse Union the previous season. The first Minto Cup championship game was played on September 29, 1901 between Ottawa Capitals and Cornwall Colts. Won by Ottawa 3 goals to 2, the future King George V and Queen Mary were both in attendance as spectators – and after the match, he was presented with a lacrosse stick and the game ball.

The Minto Cup professional competition was dominated by the New Westminster Salmonbellies, who held the trophy for 21 of the 29 years in which it was contested (the competition was suspended during World War I). 1924 was the last year professionals played for the Minto Cup—after the Coast professional league folded in June 1924, it was then placed into storage and for a time lost and forgotten when the last trustee died. The trophy was located just prior to the 1938 junior competition, underneath a desk in his office. During the trophy's period of inactivity, there were suggestions to make the Minto Cup an international championship trophy.

In 1934 the last trustee appointed to supervise the Cup died, and the Lord Minto of the day eventually transferred it to the Canadian Lacrosse Association, which decided to award it as the trophy for the national junior men's champion, starting in 1937. Originally, the competition was between all-star provincial teams formed by adding players to the provincial champion. In 1960 this practice was abandoned and the trophy has since been competed for by the Junior A provincial champions of British Columbia of the British Columbia Junior A Lacrosse League, Ontario of the Ontario Junior A Lacrosse League and recently Alberta, of the RMLL the only provinces where organized lacrosse thrives.