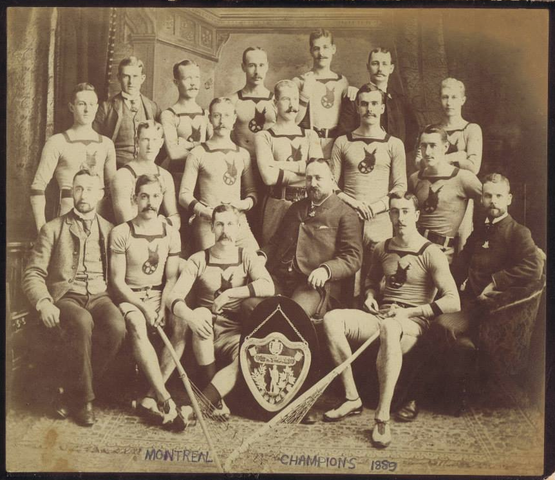 The Montreal Amateur Athletic Association came into existence June 1881 and began as a confederation of three sporting clubs: The Montreal Snow Shoe Club, The Montreal Bicycle Club, and The Montreal Lacrosse Club. These founding clubs shared the club space of the Montreal Gymnasium, located at Mansfield Street and de Maisonneuve Boulevard.

Montreal Amateur Athletic Association, originally located downtown, acquired some 10 acres of the former Hallowell and Ward estates adjoining the Irvine Farm in 1886. The new grounds opened to members in 1887 with an original entrance on Dorchester. This was later replaced by one at 4350 St. Catherine, address of the current Westmount High School.

Lacrosse Grounds were located at the northwest corner of St. Catherine and Atwater in the 1880s. Here, the Shamrocks played to a world championship in 1889-1900.

The grounds included an athletic field surrounded by a banked cinder track. The running track was reported to be one of the fastest on the continent. Bicycle racing, track and field, cricket, lacrosse, rugby, tennis and other sporting events took place in the summer. In 1899, it welcomed the World Bicycle Meeting.