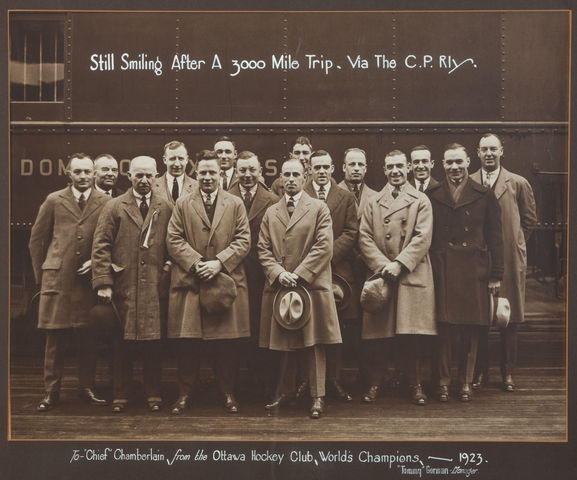 The Ottawa Senators Hockey Team arrive in Vancouver to play the Vancouver Maroons of the Pacific Coast Hockey League in March, 1923

When the late Rufus Gardner Chamberlin, chief of the investigation department of the Canadian Pacific Railway, heard that Ottawa Senators manager Tommy Gorman boldly predicted that his squad would win the 1923 NHL Championship, and that it would travel to the Pacific coast via his the CPR, Chamberlin promised to equip the team with the finest train that ever left the CPR shops. He lived up to his word, as he provided the eventual champions with "Neptune," a brand new coach that had never been used for the four-and-a-half day jaunt. Offered here is the only enlarged original photograph that features the Stanley Cup Champions in front of the car that made the 3000-mile trip to the Pacific with ease. Written in white ink is the following inscription to Chamberlin: "Still Smiling After A 3000 Mile Trip - Via The C.P.R" and "To-Chief Chamberlain (sic) from the Ottawa Hockey Club, World's Champions - 1923, Tommy Gorman - Manager.