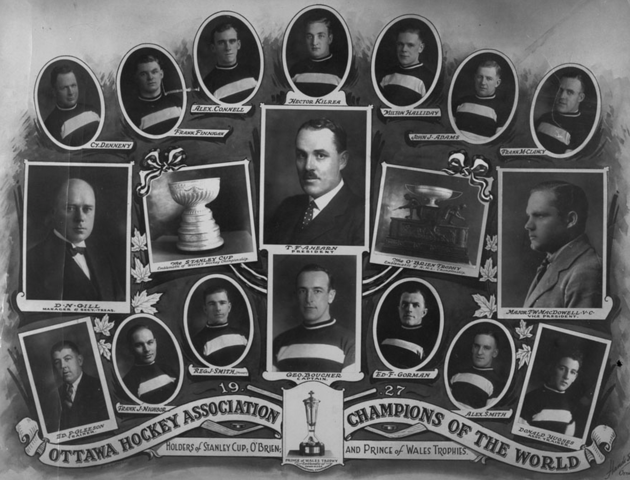 The first game on April 7, 1927 ended in a scoreless draw after two ten-minute overtime periods. In the overtime, the condition of the ice became unplayable and NHL President Frank Calder called the game. There were two disallowed goals, one by each team, and both disallowed by off-sides.

In the second game on April 9, 1927, the Senators changed their tactics, going on the offensive. King Clancy and Cy Denneny scored in the first period for Ottawa. The Senators played a defensive game in the second period. In the third period, Harry Oliver scored for the Boston Bruins on a goal-mouth scramble to bring the Bruins within one. In the final minute, with the Bruins pressing, Denneny scored again to put the game beyond reach 3 to 1.

Game three on April 11, 1927, the series switched to Ottawa. The Bruins took the early lead. Jimmy Herbert broke in on a pass from Harry Oliver and beat Alex Connell in the Ottawa net at 7:14 of the first period. In the second, the Senators picked up the pace and Denneny scored at 15:15 on a pass from Clancy to tie the score. Neither team could break the tie in the third period or the two overtimes. The result meant that Ottawa could win the series with a win in game four, making game five unnecessary. A Boston win would send the series to a game five.

In game four on April 13, 1927 the Senators decided to start two players who had been substitutes in the previous games, Frank Finnigan and Hec Kilrea and the moves were a success. The Senators came out on the offensive and took a 2–0 lead in the first period on goals by Finnigan and Denneny. Denneny scored again in the third period to put the Senators ahead 3–0. The game degenerated after that. Lionel Hitchman and George Boucher fought, with Eddie Shore jumping in. Ottawa police jumped onto the ice to help the referees and Hitchman and Boucher were ejected. Harry Oliver scored with six minutes to play. Ottawa's Hooley Smith butt-ended Oliver in the face with a minute to play. Shore jumped in to fight Smith and the two were ejected.
After the game Billy Coutu attacked referee Jerry Laflamme on his way to the dressing room, and was later banned from the NHL for life. Hooley Smith was given a one-month suspension effective in the 1927–28 season, while Boucher, Hitchman and Jimmy Herbert were all fined.

1927 was also the last year in which the O'Brien trophy would be awarded to the NHL Champions.