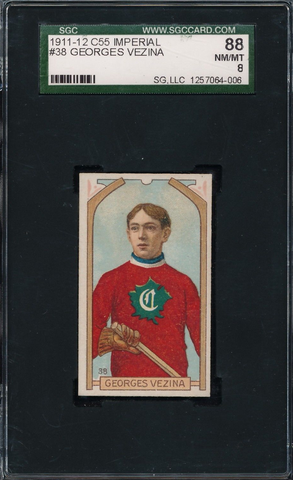 This Hockey Card shows the very 1st Colors of the Montreal Canadiens, or Les Canadiens in 1910

The main body of the 1910-1911 uniform was red wool, with white and light blue stripes ringing the sleeve cuffs and the turtleneck, with wider stripes in the same pattern at base of sweater. In all instances the white stripe was placed in between the blue stripes and the body of the sweater. The Canadiens' logo that season was an old-English-styled white "C" and "A" (standing for "Canadien" and "Athletique") on a green maple leaf in the centre of the chest.