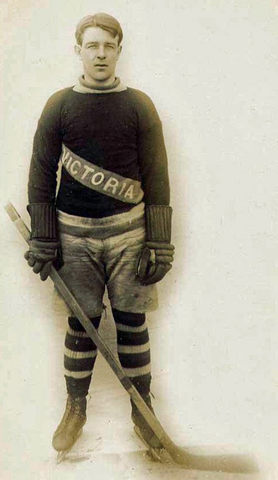 Bobby Rowe 1st played Ice Hockey at the senior level in 1902 at the age of 17 for the Portage Lakes Hockey Club.

Rowe played 1 game for the Haileybury Hockey Club in the 1908-09 season.

Rowe then played for the Renfrew Creamery Kings for 2 seasons from 1909 to 1911 becoming a goal scoring professional and one of the team leaders in penalty minutes.

At the start of the new Pacific Coast Hockey Association league in 1911, Rowe move to the West Coast of Canada, where he would play for 15 seasons, starting with the Victoria Senators / Aristocrats, then moving on to play for the Seattle Metropolitans, helping them win the Stanley Cup in 1917 vs the Montreal Canadiens.

The Seattle Metropolitans would become the 1st American team to win the Stanley Cup.

Rowe played 4 games for the Boston Bruins in the NHL during the 1924-25 season, scoring 1 goal.