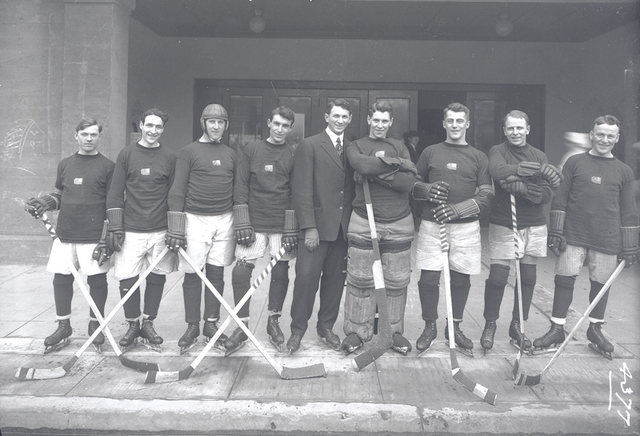 NOTE - Ernie “Moose” Johnson is wearing a football helmet, the 1st ever pro Hockey player to wear a helmet.

The Rosebuds, Portland’s first professional ice Hockey team, was the first United States-based franchise to compete for the Stanley Cup. A member of the Pacific Coast Hockey Association / PCHA.

The Rosebuds began as the New Westminster Royals in British Columbia and moved to Portland, Oregon in 1914. They were in pursuit of a bigger arena. They played their home games at the Portland Ice Hippodrome, located between Northwest 20th and Northwest Marshall.

After a mediocre first season that saw the team finish out of the playoffs, the Rosebuds won the PCHA title the next year. In that era, the competition for the Stanley Cup pitted the PCHA champion against the National Hockey Association / NHA champion.

In 1916, the NHA champion was the Montreal Canadiens, who had yet to win any of their record twenty-four cup championships. The rules aided their cause, however, as the best of five series was to be played entirely in one locale—a cost-cutting maneuver that made the NHA representative the only home team. That meant that the Rosebuds had to make the cross-continent trek to play in front of a hostile Montreal crowd for each game.

Portland won the first game 2-1 before dropping the next two. They tied the series by winning game four. In game five, the Canadiens, backstopped by George Vezina, stymied the Rosebuds. While a goal by centre Tommy Dunderdale gave Portland some hope, Montreal held on to win 2-1, clinching the series.