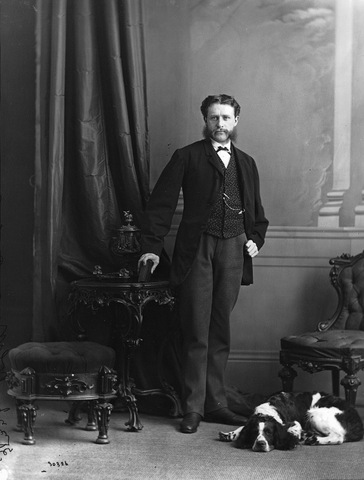 William George Beers (Born May 5, 1843 in Montreal, Quebec – Died December 26, 1900 in Montreal Quebec), a noted Canadian dentist and patriot, is referred to as the "Father of Modern Lacrosse" for his work establishing the first set of playing rules for the game of Lacrosse.

William Beers was involved with lacrosse from a young age. As a teenager, in 1856, was a member of the Montreal Lacrosse Club. He was selected at age 17 to be a goalkeeper for a Montreal exhibition team that played a match before the Prince of Wales.
In 1860, Beers began to codify the first written rules of the modern game. Prior to this, all rules of the game needed to be decided prior to each game. Some of the rules established by Beers were the size of and the use of a rubber lacrosse ball, that the lacrosse stick could be any length, but the pocket needed to be flat in the absence of a ball, length of the field to 200 yards (180 m), size of the goal and goal crease, twelve members of a team on the field at a time, and the length of a match to first to reach five goals, or lead by three.

In 1867, as lacrosse was growing significantly in popularity, Beers created the Canadian National Lacrosse Foundation. In 1869, Beers published a book on lacrosse entitled Lacrosse: The National Game of Canada. In 1876, Beers organized a team of Canadian players and Indians players to tour England, Scotland, and Ireland to showcase the sport. During this trip in 1876, Queen Victoria witnessed an exhibition game and was impressed, saying "The game is very pretty to watch." Her endorsement was enough for many English girls' schools to adopt the sport in the 1890s. Again in 1883, Beers returned to England to showcase lacrosse. This time Beers brought two teams to play exhibition games.

Dr. William George Beers was inducted into Canadian Lacrosse Hall of Fame in 1965 as a Builder