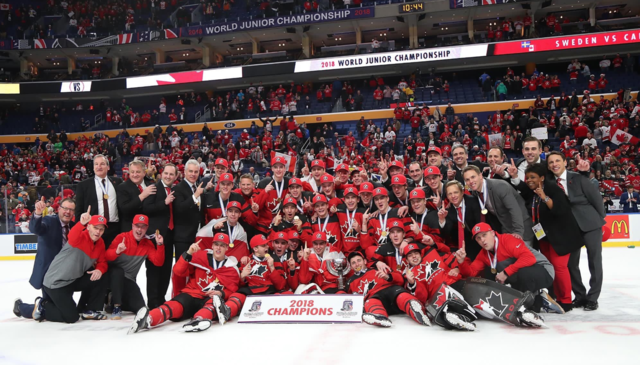 The opening period, while scoreless, involved missed opportunities for both teams. With less than eight minutes remaining, Canada’s captain Dubé believed to have scored the opening goal as did the thousands in attendance at KeyBank Center. The officials waved off the tally and deemed that play was dead.

Dubé then scored 1:47 into the second period to pull Canada in front for the game’s first lead. Dubé, who entered the contest with three points, beat Sweden’s Timothy Liljegren for the inside edge before teammate Jordan Kyrou found Dubé streaking towards the net.

“It was tough,” Dubé said. “It was nice to get a little momentum, but that second one, I guess the first one overall in the game, to get that was a nice confidence booster.”

Dubé’s goal was the first time Sweden trailed in its first six games.

Canada held that lead for the better part of the period. When Sweden’s Lias Andersson was penalized for interference, it seemed Canada was moments away from extending the lead. Instead, Sweden capitalized on the penalty kill with a short-handed goal.

Tim Soderlund, who tallied four points all tournament long, beat Hart’s glove side with a great shot, and the game was tied. When the game progressed late into the third period, Canada said the period had an overtime feel to it — whoever scores next will be the team who takes home the gold medal.

Sweden’s Jesper Sellgren rang off his shot off the post in the third period and Taylor Raddysh came within inches of giving Canada the late lead but the puck bounced off the post too.

When it seemed like Canada and Sweden were surely heading past regulation to overtime, Steenbergen redirected a incredible pass, and scored with 1:40 remaining in regulation to the give Canada its 17th gold medal. Steenbergen, who had yet to score all tournament long, would be Canada’s hero.

“I couldn’t be happier for any other guy to get it,” Dubé said. “Right when he got that, it was the best feeling I’ve ever had. He’s a champion forever now.”

Alex Formenton added an empty net goal to put the game out of Sweden’s reach, and to secure Canada’s 3-1 gold medal-winning victory.