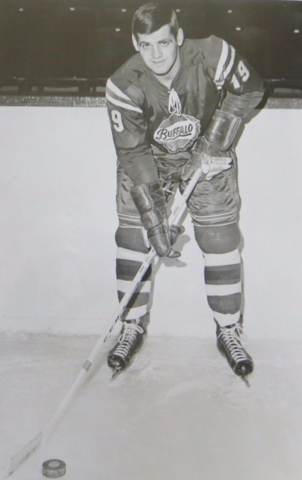 It was a life too brief for a player whose career spanned twenty years, if only one full NHL season. Caron played in an assortment of minor pro leagues, one of the best scorers around. His skating was weak and he was slow, but when he got into the offensive end he could bury the puck like few players around.
But like many others, Caron played during the height of the Original Six and as a result saw no time in the NHL. After graduating from Chicoutimi in the Quebec junior league, he played for the Quebec Aces and then embarked on a tour of minor-pro duty. With Amherst in 1961-62 he scored a league-leading 76 goals and 122 points, and the next year he scored 61 more for the St. Louis Braves even though he didn't play the full season.

It wasn't until the Oakland Seals claimed him in the Expansion Draft in 1967 that he made it to the NHL, and after one season he was traded to Montreal, played two games with the Habs, and was out of the NHL for good. Caron made his way to the Nordiques in the WHA in 1972 for a three-year stint, but by 1975 he was down in the North American Hockey League playing for the Beauce Jaros. There, at age 38, he scored a league-high 78 goals in 73 games, but that summer, 1978, he suffered a heart attack and had to retire.