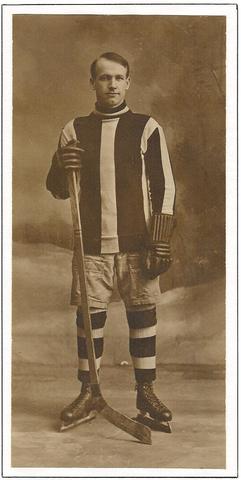 David Bruce Ridpath (1884-01-02– 1925-06-04) was a Canadian Professional Ice Hockey player and general manager. He was a member of the 1911 Stanley Cup champion Ottawa Senators before an automobile accident ended his playing career.

Ridpath played junior hockey in 1904 with the Westerns (representing Parkdale, Toronto) in the Ontario Hockey Association(OHA). As a senior, he joined the Toronto Marlboros of the OHA in 1905. He turned professional in 1906 with the Toronto team, playing in eight games, scoring 17 goals in their exhibition schedule. He played three seasons for the Torontos, helping the team to win the 1908 league title and scored a goal in a 6-4 loss to the Montreal Wanderers in a one-game Stanley Cup challenge. On 1909-01-30, he scored seven goals in one game as Toronto defeated Brantford 15-10. Later that season, he played for Cobalt in the Temiskaming League that would form the foundation of the new National Hockey Association later that year.

Ridpath signed with the Ottawa Senators in 1909-10, playing in the NHA. He played on a forward line with Gordon Roberts and Marty Walsh and rover Bruce Stuart and later with the line of Walsh, Dubbie Kerr and Jack Darragh. In 1910–11, his most productive season, he scored 23 goals in 16 games and help Ottawa win the NHA final and the Stanley Cup.

He suffered a fractured skull when he was hit by a car on Yonge Street in Toronto on 1911-11-02 and missed the entire 1911-12 season. The new Toronto Blueshirts wanted him to play for them, and Ottawa demanded $500 for his rights, but he never fully recovered from his injuries, which were initially life-threatening, ending his playing career. Benefits were held in Ottawa and Toronto for Ridpath who was a popular player.
Ridpath was appointed the first manager of the Blueshirts and assembled the Toronto Blueshirts for their first season of play in the NHA. He resigned as manager in October 1913. He was considering playing for the team, but his sight was not good enough to play