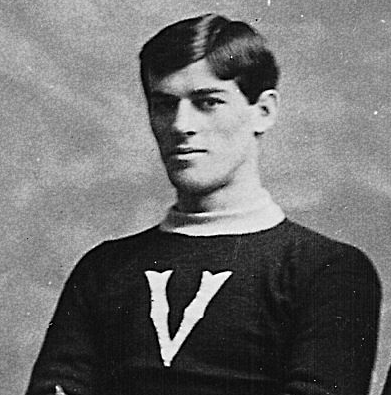 Hartland Brydges MacDougall (Born 1875 in Montreal, Quebec Died, April 28, 1947) was a Canadian Amateur Ice Hockey player - Hartland played with the Montreal Victorias during their famous Stanley Cup runs of the late 1890s. He is credited for being a member of 4 Stanley Cup winning teams (1895, 1896, 1897 and 1898). He typically played goaltender and point. Beginning his career as a goaltender in 1894 his success only came as a result of playing defence. In 1895 Hartland played goal 3 times for the Montreal Victorias between January 12, 1895 and January 26, 1895. He was subsequently replaced in goal by Robert Jones after his second loss of the season (a 5-0 loss to Montreal) on January 26, 1895. Near the end of his career he was on a defence pairing with Hall of Famer Mike Grant but would eventually leave hockey at the end of the 1898 season. He was also a member of the Montreal Amateur Athletic Association playing football as a star fullback and won many national Polo championships before retiring completely from sports in 1928 - He was the son of George Campbell MacDougall, Chairman of the Montreal Stock Exchange, and Grace Brydges, daughter of Charles John Brydges. Between his father and two of his uncles they founded the Montreal Stock Exchange in 1874. Hartland MacDougall was a first cousin of Brigadier John H. Price, O.B.E., M.C., son of Sir William Price of Quebec City. His aunt, Mrs Hartland St. Clair MacDougall, was the sister of Lady Allan and Mrs Andrew Allan - Hartland was educated at Bishop's College School and Bishops University in Canada. Hartland's career did not only encompass sports. About the time that he began his Hockey career in 1894 he began a financial career at the Bank of Montreal. In 1899 He left the bank of Montreal and resigned from Hockey to join C. Meredith and Company becoming a partner. The senior partner, Charles Meredith, was a cousin of Fred Meredith, who had served as president of the Montreal Victorias for three of Hartland's Stanley Cups. Hartland gained membership to the Montreal stock exchange and developed his financial skills becoming governor in 1909, by 1914 he would become Chairman. In 1914 however his life would change from business to war. Soon after war was declared he enlisted in the British regiment. By May 1915 he was sent overseas fighting in the Third Canadian division in France until the end of the war. Hartland received several promotions during the war and came home a Major - Hartland returned to Canada in 1918, shortly after his uncle died. In 1919, Hartland MacDougall was the founding president of the Quebec Amateur Hockey Association. In the later part of 1920, Hartland resigned from C.Meredith and Company and was offered to take over the family investment business. He did so, and made Robert E. MacDougall (of no family relation) his business partner forming MacDougall and MacDougall. As a financier Hartland was involved in the creation of the Montreal Forum and director of the Canadian Arena Company. He would help found the Montreal Maroons in 1926. Hartland would run MacDougall and MacDougall into the second world war, where his sons would eventually take over. The firm is still in existence today as MacDougall, MacDougall and MacTier - Hartland MacDougall married Edith Reford, a daughter of Robert Wilson Reford, Sr., and the sister of Robert Wilson Reford who married Elsie Reford, grand-daughter of George Stephen, 1st Baron Mount Stephen. They were the parents of three sons and two daughters. Their eldest son, Hartland Campbell MacDougall, married Dorothy, the eldest daughter of Lt.-Colonel Herbert Molson (1875–1938) M.C., C.M.G., President of the Molson Brewery. Dorothy (Molson) MacDougall was the niece of Percival Molson, one of Hartland's team-mates on the Montreal Victorias, and the sister of Senator Hartland Molson, who succeeded his father to the Presidency of the Molson Brewery. The MacDougall's second son, Robert Reford MacDougall, married Margaret Meredith Cape, the daughter of Lt.-Colonel Edmund Graves Meredith Cape, whose mother was a first cousin of the already mentioned Fred Meredith - In 1976 he was made a member of the Canada's Sports Hall of Fame