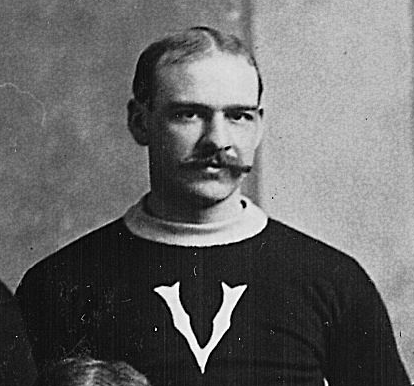 Michael Grant (November 27, 1873 – August 19, 1955) was a Canadian Amateur Ice Hockey player. Grant was a defenceman for the Montreal Victorias in the era prior to professional Hockey. Grant was a member of the junior champion Crystal Junior Hockey Club in 1890-91 and went on to win Intermediate championships with the Crystal Intermediates in the 1891-92 and 1892-93 seasons - Grant was the captain of four Stanley Cup Championships in 1895, 1896, 1897 and 1898 - Grant was the 1st defenceman that used his offensive prowess to help his team. The son of a Montreal blacksmith, was just eleven years old when he won three speed skating titles in the under-12, under-14, and under-16 age groups. He took his skating prowess to the Hockey rink and was to become known as the 1st original rushing defencemen in Ice Hockey. As a member and captain of the Montreal Victorias he led the club to five Stanley Cup wins. Grant helped spread Hockey's popularity and was one of Canada's first ambassadors of Hockey to the United States, organizing exhibition games and demonstrations of the sport in the north-eastern United States - Grant is the youngest player ever to captain a team to the Stanley Cup. He did so at age 21 and 2 months - Grant retired after the 1901-02 season but returned to the game as a referee in the March 1905 Stanley Cup challenge between Rat Portage Thistles and the Ottawa Silver Seven - In addition to Hockey and skating successes, Grant played amateur lacrosse in his native Montreal. His father's trade allowed him to associate with horseracing in both Montreal and Ottawa and later in life he was a familiar figure at the track as a paddock judge for more than 40 years - Grant was inducted into the Hockey Hall of Fame in 1950