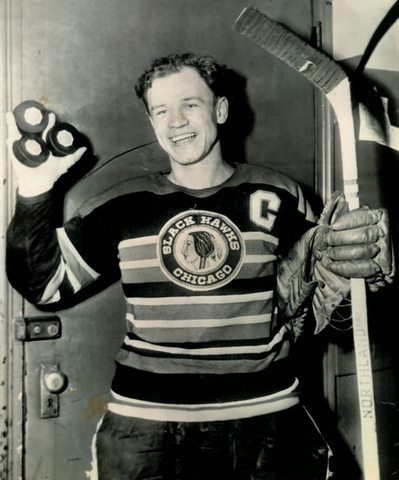 Bill Mosienko holds an amazing NHL record that likely will never be matched. On March 23, 1952, Mosienko scored three goals in a 21 second time frame vs the New York Rangers at Madison Square Gardens - All three goals were assisted by Gus Bodnar - In his 14 year career spent exclusively with the Chicago Blackhawks, Mosienko tallied 258 goals and 282 assists. He was the recipient of the Lady Byng Trophy in 1945 as the most sportsmanlike player. Mosienko Quoted: "It was quite an accomplishment, I hope (the record) stays. After I scored the third goal, Jim Peters skated up to me and told me to keep the puck because I had set a new record. I was very happy and proud. It was like being on cloud nine."